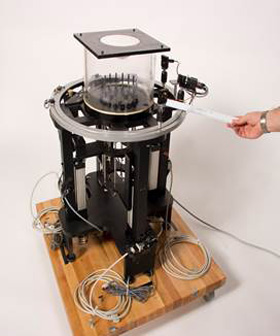 WASHINGTON D.C., December 16, 2014 — Although currently available diagnostic screening systems for breast cancer like X-ray computed tomography (CT) and mammography are effective at detecting early signs of tumors, they are far from perfect, subjecting patients to ionizing radiation and sometimes inflicting discomfort on women who are undergoing screening because of the compression of the breast that is required to produce diagnostically useful images.

A better, cheaper, and safer way to look for the telltale signs of breast cancer may be with microwaves, said Neil Epstein, a NSERC CREATE I3T postdoctoral fellow at the University of Calgary in Canada. Epstein and his colleagues—engineering professor Paul Meaney of Dartmouth College’s Thayer School of Engineering and Keith Paulsen, director of the Dartmouth Advanced Imaging Center and the Robert A. Pritzker Professor of Biomedical Engineering and Professor of Radiology at the Geisel School of Medicine at Dartmouth College — describe just such a microwave imaging system in the current issue of the journal Review of Scientific Instruments, from AIP Publishing.

Microwave imaging relies upon the known differences in the so-called dielectric properties of cancerous tissue and normal tissue—that is, their ability to conduct electricity or sustain an electric field. In the technique, the breast is suspended in a liquid bath (but not compressed) and closely surrounded by an array of 16 antennae. Each antenna illuminates the breast individually with a very low power microwave signal, with approximately one one-thousandth the power of a cell phone, while the other 15 antennae receive the signals transmitted through the breast; this is repeated for all 16 antennae, providing data that can be used to produce a 3-D representation of the breast, including the location of both normal and cancerous tissue.

“The iterative image reconstruction algorithm computes what the dielectric property distribution must have been to generate the measured signal patterns,” Epstein said. “It is quite similar to X-ray computed tomography, where the target is radiated from all of the surrounding directions and the data is synthesized to create an image of the internal structures.”

Although microwave imaging systems cannot yet provide the spatial resolution of mammography, they offer better specificity, Epstein said. In other words, once tumors are localized, the microwave imaging systems may be more adept at identifying whether those tumors are benign or malignant—determinations now made through tissue biopsies. “Researchers are realizing that this lack of specificity is a significant limitation for conventional imaging techniques and are looking for alternative ways to enhance it.  Microwave imaging could fill this niche, possibly in combination with other modalities,” he said.

University of Calgary and Dartmouth College