WASHINGTON D.C. May 13, 2014 — The ability to transfer a gene or DNA sequence from one animal into the genome of another plays a critical role in a wide range of medical research—including cancer, Alzheimer’s disease, and diabetes.

But the traditional method of transferring genetic material into a new cell, called “microinjection,” has a serious downside. It involves using a small glass pipette to pump a solution containing DNA into the nucleus of an egg cell, but the extra fluid can cause the cell to swell and destroy it—resulting in a 25 to 40 percent cell death rate.

Now, thanks to the work of researchers from Brigham Young University, there’s a way to avoid cell death when introducing DNA into egg cells. In Review of Scientific Instruments, the team describes its microelectromechanical system (MEMS) nanoinjector, which was designed to inject DNA into mouse zygotes (single-cell embryos consisting of a fertilized egg).

“Essentially, we use electrical forces to attract and repel DNA—allowing injections to occur with a tiny, electrically conductive lance,” explained Brian Jensen, associate professor in the Department of Mechanical Engineering at Brigham Young University. “DNA is attracted to the outside of the lance using positive voltage, and then the lance is inserted into a cell.”

The MEMS nanoinjector’s lance is incredibly small and no extra fluid is used with this technique, so cells undergo much less stress compared to the traditional microinjection process. 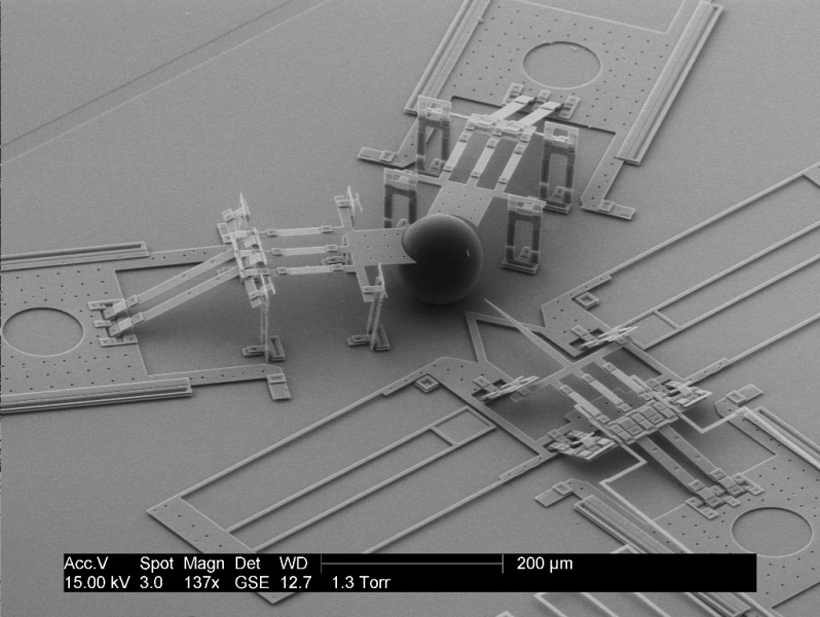 This ability to inject DNA into cells without causing cell death leads to “more efficient injections, which in turn reduces the cost to create a transgenic animal,” according to Jensen.

One of the team’s most significant findings is that it’s possible to use the electrical forces to get DNA into the nucleus of the cell—without having to carefully aim the lance into the pronucleus (the cellular structure containing the cell’s DNA). “This may enable future automation of the injections, without requiring manual injection,” Jensen says.

It may also mean that injections can be performed in animals with cloudy or opaque embryos. “Such animals, including many interesting larger ones like pigs, would be attractive for a variety of transgenic technologies,” said Jensen. “We believe nanoinjection may open new fields of discovery in these animals.”

As a next step, Jensen and colleagues are performing injections into cells in a cell culture using an array of lances that can inject hundreds of thousands of cells at once. “We expect the lance array may enable gene therapy using a culture of a patient’s own cells,” he noted.

The paper’s first author Quentin Aten participated in this research while at Brigham Young University. He is now working at Nexus Spine LLC.