Experiments simulate the interactions between flowing water and underwater plants

WASHINGTON, D.C., October 4, 2016 — Beneath the surface of rivers and streams, aquatic plants sway with the current, playing an unseen but vital role in the life of the waterway. Through a new series of experiments that model these underwater undulations, researchers have measured how the current bends simulated plants and the drag forces exerted on them. The analysis is important for better management and understanding of these aquatic systems, and potentially even for energy-harvesting devices.

Hidden in the watery abyss, plants slow the flow, prevent erosion, and are important for sediment transport, for water quality, and as habitats for plants and animals. For scientists who want to better understand these rivers and ecosystems, and for land managers who want to ensure the health of these environments, knowing how water flow physically affects plants is vital.

A current that’s too strong, for example, can break, uproot and kill vegetation. Knowing the forces that are exerted can help land-managers determine how to divert flow and protect the plants. Measurements of the drag forces could also inform computer simulations that model the fluid mechanics and the dispersal of important chemicals and nutrients around the plants.

Previous research, however, has only analyzed these forces on a single plant or leaf, discovering that it deforms and bends to reduce the forces. But the studies ignore the effect of neighboring plants in aquatic colonies.

“The forces were known for one single plant, but it wasn’t obvious that there could be strong interactions between individual plants when placed in an array underwater,” said Delphine Doppler, a physicist at the University of Lyon in France.

Now, for the first time, Doppler and her colleagues have studied the drag force experienced by an individual plant in its colony. In particular, they’ve examined how the force depends on the spacing between plants and how plant deformation depends on flow speed and plant size. They describe their analysis in this week’s Physics of Fluids, from AIP Publishing.

In their experiments, the researchers modeled plants using strips of flexible plastic 10, 15 and 20 millimeters wide and 60 millimeters high. The strips were lined up and placed in an inclined water tank that enables a controlled flow down a slope. Using cameras and by knowing the tank inclination, the researchers could determine how the water pushes on the simulated plants.

They found that even when surrounded by others, a strip bends in the same way as if it were alone. The drag force, on the other hand, decreases as the researchers place the strips closer together. Nearby strips block some of the flow, lowering the force on one another. Individual plants in a dense aquatic canopy therefore need not deform as much as a single plant, to avoid serious damage from strong currents. However, when the distance between the strips is about four times longer than their width, this screening effect disappears. Similarly, the drag coefficient — a number that quantifies the strength of the drag force — increases linearly as the strips get farther apart. The coefficient rises until the distance is, again, about four times the strip’s width. 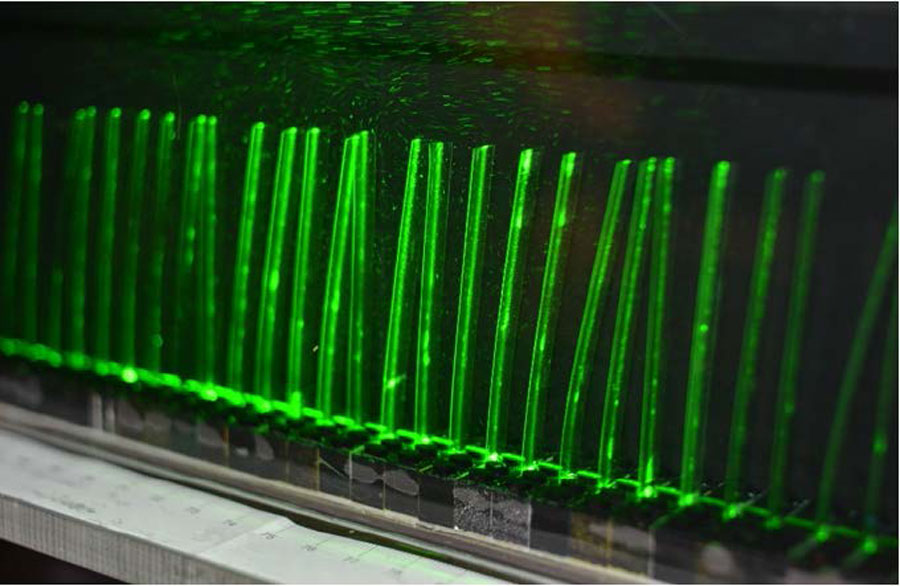 The new analysis might help engineers who are designing devices that convert the energy of moving fluids into electricity. These devices use the same kind of flexible plastic that mimics swaying plants.

The next step, Doppler says, is to study the wave motions between the tip of the plants and the surface of the water. The flow in this region plays an important role in the exchange of chemicals and nutrients between plants and the water.

To be sure, the experimental setup is an idealized scenario, since most plants in rivers are not rectangular strips lined up at uniform distances from each other. Still, Doppler says, the general results — the reduction in bending and how the density of aquatic colonies affects the drag force — should hold in more realistic cases and provide a good starting point for more realistic simulations of what happens in the river depths.