Researchers in China nearly double the continuous output power of a type of terahertz laser, opening up applications in spectroscopy, imaging, remote sensing and more 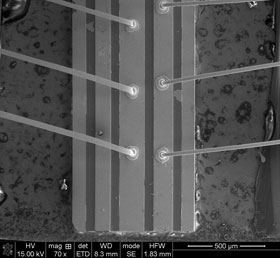 WASHINGTON, D.C., July 26, 2016 — Researchers have nearly doubled the continuous output power of a type of laser, called a terahertz quantum cascade laser, with potential applications in medical imaging, airport security and more. Increasing the continuous output power of these lasers is an important step toward increasing the range of practical applications. The researchers report their results in the journal AIP Advances, from AIP Publishing.

Terahertz radiation sits between microwaves and infrared light on the electromagnetic spectrum. It is relatively low-energy and can penetrate materials such as clothing, wood, plastic and ceramics. The unique qualitites of terahertz radiation make it an attractive candidiate for imaging, but the ability to produce and control terahertz waves has lagged behind technology for radio, microwave and visible light.

Recently, scientists have made rapid progress on a technology to produce terahertz light called a quantum cascade laser or QCL. Quantum cascade lasers are made from thin layers of material. The thin layers give the laser the valuble property of tunability, meaning the laser can be designed to emit at a chosen wavelength. The output power of terahertz QCLs is also relatively high compared to other terahertz sources, said Xuemin Wang, a researcher in the China Academy of Engineering Physics and first author on the new paper.

Wang and his colleagues' work focuses on even further increasing the output power of terahertz quantum cascade lasers, especially in the mode in which the laser output power is continuous. "In engineering, biomechanics and medical science, the applications require continuous wave mode," Wang said.

By optimizing the material growth and manufacturing process for terahertz QCLs, Wang and his team made a laser with a record output power of up to 230 milliwatts in continuous wave mode. The previous record was 138 milliwatts.

Wang said the new 230 milliwatt laser could be used in air, a challenge for lower-powered lasers since particles in the air can scatter or absorb the laser light before it reaches its target.

The increase demonstrates that the team's method of precisely controlling the growth of the laser's layers can increase output power, Wang said, and he is hopeful that future improvements could bring the continuous power above 1 watt. The 1 watt level has been reached in terahertz QCLs in pulsed wave mode.

Wang said he thinks scientists and engineers could use the new laser as a flexible source of terahertz radiation for spectroscopy, medicial imaging, remote sensing and other applications.

China Academy of Engineering Physics in Sichuan, China and the Institute of Applied Physics and Computational Mathematics in Beijing, China