A recently proposed method using lasers to remove soil contaminants may be cheaper and more efficient than conventional methods.

WASHINGTON, D.C., August 29, 2017 — There might be a new and improved way to rid contaminated soil of toxins and pollutants: zap it with lasers. By directly breaking down pollutants, researchers say, high-powered lasers can now be more efficient and cheaper than conventional decontamination techniques.

“Other methods are either costly, labor intensive, have low efficiency, or take a long time,” said Ming Su, an associate professor of chemical engineer at Northeastern University. With two of his graduate students, Wenjun Zheng and Sichao Hou, he has shown how such a laser system could work, describing the proof-of-principle results this week in the Journal of Applied Physics, from AIP Publishing.

The biggest advantage of lasers, Su explained, is that they can be used at the site of decontamination. Many conventional decontamination methods require digging up contaminated soil, hauling it somewhere else to be cleaned, and then returning it — a process that is expensive and time-consuming.

These methods also have shortcomings in how well they can decontaminate. One of the most popular methods uses water or organic solvents to wash away the pollutants. But oftentimes, washing doesn’t eradicate contaminants; it only dilutes them. And even if the soil is clean, you might be left with another problem in contaminated water: The organic solvents can themselves be harmful to people, and the process can create byproducts that become secondary contaminants.

There are ways to decontaminate soil on-site, but they have their own limitations. Soil vapor extraction, in which air is pumped into the ground to remove volatile organic compounds, only works on permeable or homogeneous soils. Biological approaches to break down pollutants using plants or microbes are slow, and only work for low concentrations of certain contaminants.

Lasers, however, can be used on-site to completely break down contaminants. “There is no other method that can do it at such high efficiency,” Su said.

To demonstrate that the new method is feasible, the researchers tested it on a simulated soil made from porous silica. They contaminated their artificial soil with a carcinogenic chemical called DDE, which is a product of DDT, the carcinogenic pesticide that was banned in the U.S. in 1972. The DDE molecules fluoresce under ultraviolet light, making them easier to detect.

Almost immediately after shining a high-powered infrared laser on the contaminated artificial soil, the glowing ceased. The lack of fluorescence indicated that the DDE was no longer present.

To remove the harmful substance, the laser light heats up the pollutant locally, reaching temperatures of thousands of degrees Celsius. This heat is sufficient to break the chemical bonds of the pollutant, fragmenting DDE into smaller, safer molecules such as carbon dioxide and water. 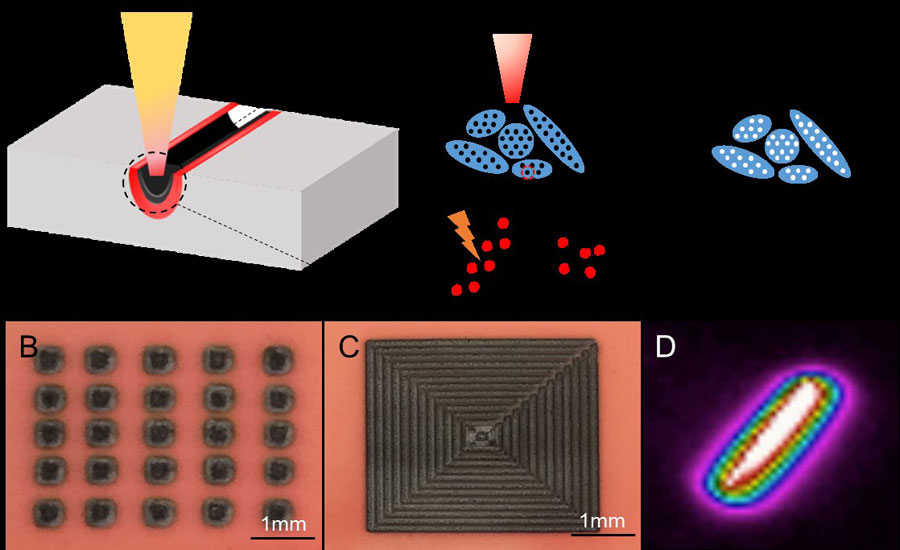 In principle, lasers should be able to work on all types of contaminants, from organic compounds to metal ions. But first, Su said, the researchers will have to do more experiments with other contaminants. Future studies also need to involve more careful analysis to determine whether all of the contaminant is, in fact, broken down sufficiently to meet standards.

Eventually, Su envisions a multi-laser system carried on the back of a truck. The laser light, channeled through fiber-optic cables that penetrate the soil, could perhaps couple to a plow that loosens the dirt, better exposing it to the laser light.