Washington, D.C., Sep. 29, 2015 — An alloy first made nearly two decades ago by the U. S. Navy could provide an efficient new way to produce electricity. The material, dubbed Galfenol, consists of iron doped with the metal gallium. In new experiments, researchers from UCLA, the University of North Texas (UNT), and the Air Force Research Laboratories have shown that Galfenol can generate as much as 80 megawatts of instantaneous power per cubic meter under strong impacts. The team describes the findings, which could lead to the development of wireless impact detectors and other applications, in a paper in the Journal of Applied Physics, by AIP Publishing.

Galfenol is a magnetoelastic material — one in which the state of magnetization can be changed by squeezing, pushing or otherwise deforming the material. Conversely, when exposed to a magnetic field, magnetoelastic materials respond by changing shape. If the materials are prevented from deforming — for example, by being held in a clamp — they instead will generate a large force.

“In general this means a magnetoelastic material can convert mechanical energy into magnetic energy, and vice versa,” explained John P. Domann, a mechanical engineering graduate student at UCLA and first author of the paper. Galfenol converts energy with high efficiency; it is able to turn roughly 70 percent of an applied mechanical energy into magnetic energy, and vice versa. (A standard car, by contrast, converts only about 15 to 30 percent of the stored energy in gasoline into useful motion.) Significantly, the magnetoelastic effect can be used to generate electricity. “If we wrap some wires around the material, we can generate an electrical current in the wire due to a change in magnetization,” Domann said.

As described in the new paper, Domann and his colleagues — including his Ph.D. advisor, Gregory P. Carman, a professor of mechanical and aerospace engineering at UCLA, and Bradley E. Martin from the Air Force Research Laboratories at Eglin Air Force Base in Florida — assessed the power-generating ability of Galfenol in experiments using a device called a Split-Hopkinson Pressure Bar to generate high amounts of compressive stress (e.g., powerful impacts). They found that when subjected to impacts, Galfenol generates as much as 80 megawatts of instantaneous power per cubic meter.

By way of comparison, a device known as an explosively driven ferromagnetic pulse generator produces 500 megawatts of power per cubic meter. However, as their name implies, such generators require an explosion — one that destroys the ferromagnet, even as it produces power. “Destroying a material requires a lot of wasted energy, creating only one-shot devices,” Domann said. “This wasteful energy and destruction is not a concern in our method using Galfenol, meaning our devices can be used repeatedly and cyclically.” 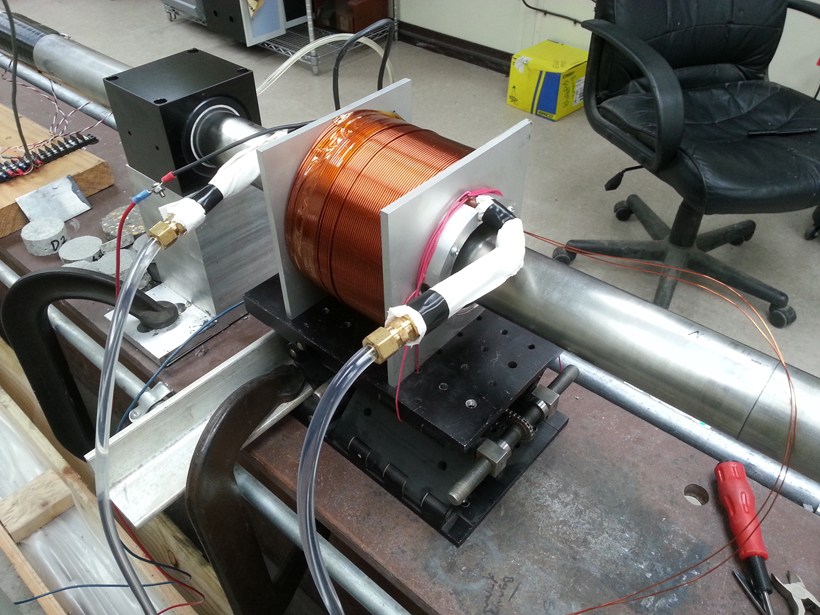 Among the potential applications, Galfenol-powered devices could be used as wireless impact detectors. “Essentially, we could fabricate small devices that send out a detectable electromagnetic wave when a mechanical pulse moves through it,” Domann said. These devices could be embedded in vehicles — military or civilian — to detect collisions. Because electromagnetic waves travel three orders of magnitude faster than mechanical waves, information about the impact could be transmitted ahead of the waves created by the impact. “In this manner, we could wirelessly determine that an impact has occurred, before the majority of the vehicle (or any passengers) even have time to feel it. This would allow a fast computer to take actions mitigating damage or injury,” he added.

Although the concept requires further analysis and testing, commercial technologies based on the idea could see the market within just a few years, the researchers said.

UCLA, the University of North Texas (UNT), and the Air Force Research Laboratories