WASHINGTON, D.C., June 9, 2015 – Materials melt faster when the lines of heat spread through the cold material like the branches of a tree — and the melting rate can be steadily increased by allowing the tree architecture to freely evolve over time, researchers have discovered. The finding could help improve phase change energy storage systems, which store heat by melting materials like wax or salt, and could play an important role in ensuring a smooth flow of energy from renewable sources like the wind and sun. The researchers report the results in the Journal of Applied Physics, from AIP Publishing.

Branching patterns, like the ones the researchers investigated in melting materials, pop up repeatedly in nature, from treetop canopies to spreading river deltas. Similar patterns emerge across seemingly distinct systems because the same basic physical law is driving the evolutionary design, said Adrian Bejan, a professor at Duke University in Durham, North Carolina.

In 1996, Bejan identified the physics behind these branching natural designs with a new principle he called the “Constructal Law,” which states that for flow systems — like rivers or trees — to survive, they must evolve over time to provide easier and easier access to the currents that flow through them. In practice this means that a river will shift course as it spreads into the sea to avoid obstructions caused by settling sediment, and a plant will reorient its branches in a constant effort to facilitate nutrient and water flow. 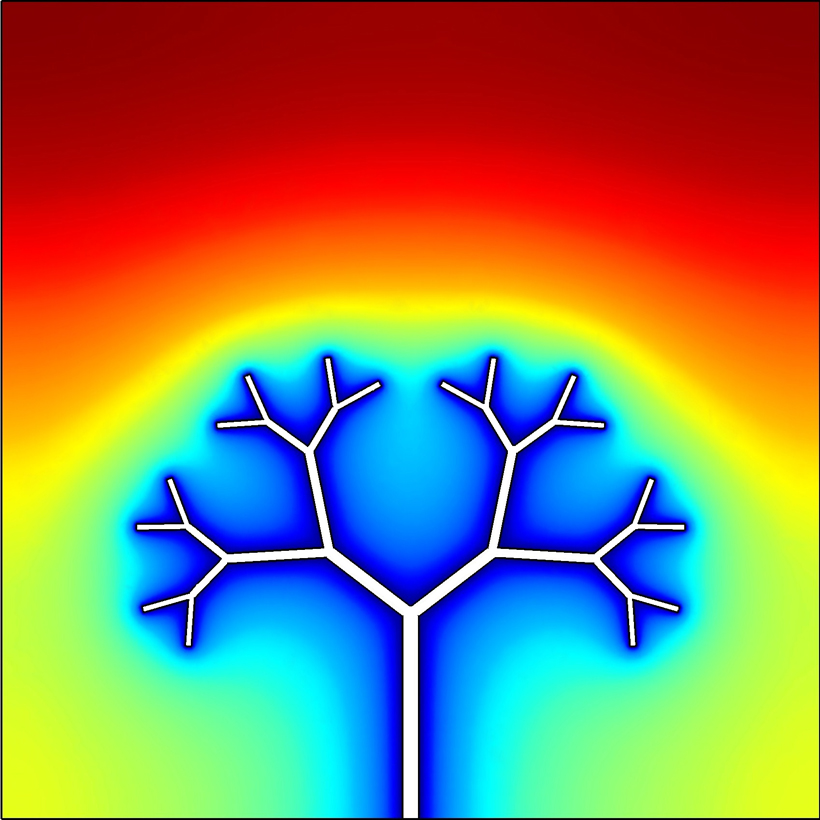 In the following two decades, Bejan and his colleagues have shown how the evolution of various natural and man-made designs, from snowflakes to airplanes, is explained by the Constructal Law.

“There is organization happening naturally all around us, and the Constructal Law is the physics principle that underpins it,” said Bejan. “What’s left is to be wise and to rely on the principle to fast-forward the design of technology.”

In the new paper Bejan, along with fellow researchers from Duke University and the Université de Toulouse in France, have applied the law to increase the performance of the technology of phase change energy storage.

Phase change energy storage systems take advantage of the fact that materials can store or release large amounts of thermal energy at a steady temperature when they undergo a phase change like melting or freezing. They can be used in buildings to soak up heat during the day and release it again at night, in spacecraft to manage heat flow, and in solar power installations to store excess energy.

“The traditional architecture is to embed a heating and cooling coil in the phase change material, but our research shows that what happens naturally is also the best way to spread the heat into the volume: it is a dendritic structure, like a hand with many fingers,” Bejan said. The researchers discovered the overall melting rate increased by allowing the length, number and branching angle of the “fingers” to evolve over time.

A faster melting rate is important because it means that thermal energy is efficiently transferred to the finite amount of phase change material in the system. Maximizing the heat transfer to the phase change material is especially important if the system is used to store energy in a vehicle where any excess weight could slow it down, Bejan added.

In general, the more complex the branching structures, the faster the melting process, but there is a law of diminishing returns. “Imagine building a branching structure, with billions of tiny, tiny fingers touching at the tips. You’d say forget it!” Bejan said. In the end, a human designer will choose to interrupt the sequence of improvements at a certain point because of the costs and time that come with added complexity.

The Constructal Law shows that natural systems are constantly evolving. Technology will follow the same path, Bejan said. “You can imagine that the phase change technology of the day would have a fixed tree-shaped architecture, but it would be overtaken in the following years by even better architecture,” Bejan said.