The instrument likely to set the future mass standard for the U.S. takes its first full measurements

WASHINGTON, D.C., June 21, 2016 — In a secure vault in the suburbs of Paris, an egg-sized cylinder of metal sits in a climate-controlled room under three glass bell jars. It is the mass against which all other masses in the world are measured — by definition the quintessential kilogram.

Yet the so-called “Le Grand K” may soon be deposed from the standard-setting throne it has held for the last 127 years. Efforts are afoot in the scientific community to define mass using a fundamental constant of nature instead — a value that in theory can be measured anywhere in the universe and won’t change with the smude of a fingerprint or the settling of a fleck of dust.

“The problem with the kilogram in Paris is that it’s so precious that people don’t want to use it,” said Stephan Schlamminger, a physicist at the National Institute of Standards and Technology (NIST) in Gaithersburg, Maryland.

Schlamminger leads a team at NIST that has now reached an important milestone on the road to replacing the standard kilogram. The scientists have taken the first full set of measurements on a new machine, called the NIST-4, designed to measure a fundamental physical quantity called Planck’s constant, or h. Planck’s constant relates a quantum particle’s frequency to its energy, which is turn can can be related to mass through Einstein’s E=mc2. 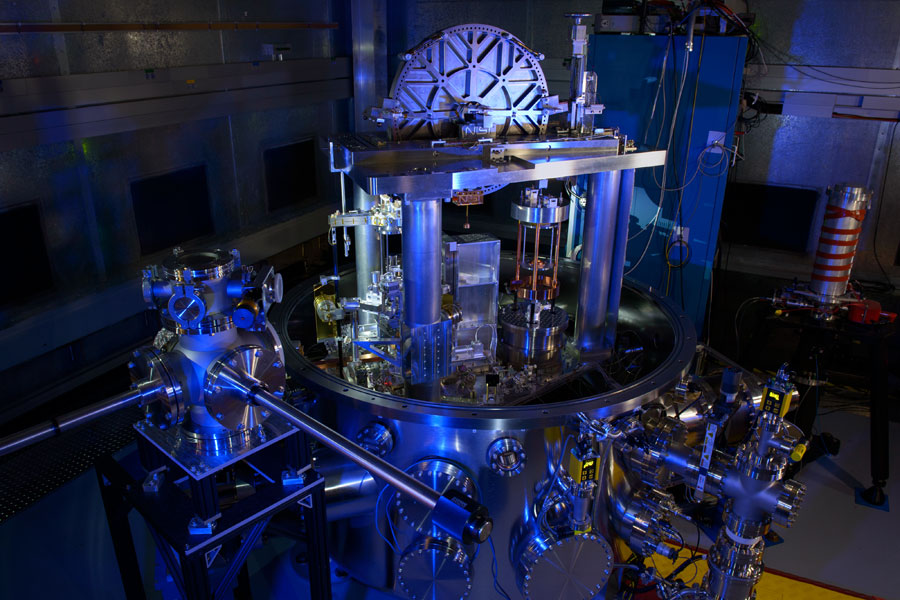 Before the world redefines the kilogram — an event currently scheduled for 2018 — multiple independent measurements of Planck’s constant must agree with each other. NIST-4’s first Planck’s constant measurement likely meets this standard, Schlamminger said. The value, which the team reports in a paper in the journal Review of Scientific Instruments, from AIP Publishing, matches with other experiments relatively well, and it has an uncertainty of only 34 parts per billion.

The team aims to get the uncertainty down to 20 parts per billion in the coming year, a goal they think they can reach by more precisely measuring how the current in the coil affects the magnetic field at the coil’s location and by reducing the measurement noise.

The best watt balance measurement of Planck’s constant so far comes from Canada’s National Research Council, with an uncertainly of 19 parts per billion, Schlamminger said. A collaboration of scientists is also working on an alternative method for measuring h, which involves counting the atoms in an almost perfect sphere of silicon. The group has arrived at a value close to the watt balance numbers, and with an uncertainly of 20 parts per billion.

All the groups will have until July 2017 to publish new measurements of Planck’s constant in order to be taken into account for the redefinition of the kilogram. The results will be fed into a computer program that will calculate a value of h that best fits all the data.

All the redefining should go on with little impact on the outside world. “It’s the frustrating part about being a metrologist,” Schlamminger said. “If you do your job right, nobody should notice.”

Still, the undertaking is an impressive scientific feat that will make the kilogram more stable and accessible in the long run. The fact that NIST-4 is taking measurements in time for the kilogram redefinition is testament to the hard work and talent of his team, Schlamminger said. The machine, which is a successor to the NIST-3 watt balance, took just four years to build from scratch, a type of project that would usually take at least 10 years, Schlamminger noted.

And although NIST-4 will eventually displace chunks of metal as the U.S. standard for measuring mass, Schlamminger is sure “Le Grand K” will retain its mythical aura. “It’s such a symbol and it has such a rich history of measurement. I don’t think people will just throw it in the garbage,” he said.

A precise instrument to determine the Planck constant, and the future kilogram

National Institute of Standards and Technology