WASHINGTON, D.C., January 3, 2017 — Last year Asier Marzo, then a doctoral student at the Public University of Navarre, helped develop the first single-sided acoustic tractor beam — that is, the first realization of trapping and pulling an object using sound waves from only one direction. Now a research assistant at the University of Bristol, Marzo has lead a team that adapted the technology to be, for all intents and purposes, 3-D printable by anyone (with some assembly required, of course).

In addition to a fully detailed how-to video that the group produced for the public, the results of the work developing this do-it-yourself, handheld acoustic tractor beam will appear this week as an open access paper in Applied Physics Letters, from AIP Publishing.

Sonic levitation is not new, and the use of sound waves to push around macroscopic objects, or create patterns in resting sand and flowing water, is scattered throughout YouTube and has been for years. This technology, however, is not simply sonic levitation, using sound to push objects around.

Based on similar fundamental physics used for decades to create optical traps, these tractor beams are true to their name in that they pull objects, trapping small beads — and even insects — at their foci.

The first versions of the device that proved the concept possible were not much larger than these new, 3-D printable versions. However, their underlying technology was more complex and required expensive electronics.

Much of the expense arose from the array of active components that electronically shaped sound waves, manipulating how and where they interfere to create the resulting object-trapping environment just above the array.

“Previously we developed a tractor beam, but it was very complicated and pricey because it required a phase array, which is a complex electronic system,” Marzo said. “In this paper, we made a simple, static tractor beam that only requires a static piece of matter.”

The simplicity (and affordability) of this passive, static-matter approach comes from the special architecture of that matter, designed to replace the phase array components and to shape sound waves structurally instead of electronically. As the sound, which now can be generated from a single source, passes through these carefully designed elements, the waves are shaped by the internal structure of the 3-D printed material.

“We can modulate a simple wave using what’s called a metamaterial which is basically a piece of matter with lots of tubes of different lengths. The sound passes through these tubes and when it exits the metamaterial, it has the correct phases to create a tractor beam,” said Marzo.

With an effect that is primarily determined by the shape of the tubes, the research team focused on optimizing the design to allow fabrication with common 3-D printers, ensuring it could be constructed even by at-home hobbyists.

According to Marzo, this was primarily a challenge in resolution, requiring a design that would not suffer from the limited precision of lower-end 3-D printer nozzles. “We needed to engineer the tubes very well to allow them to be 3-D printed with a normal 3-D printer. A normal 3-D printer has a lot of limitations,” he said. 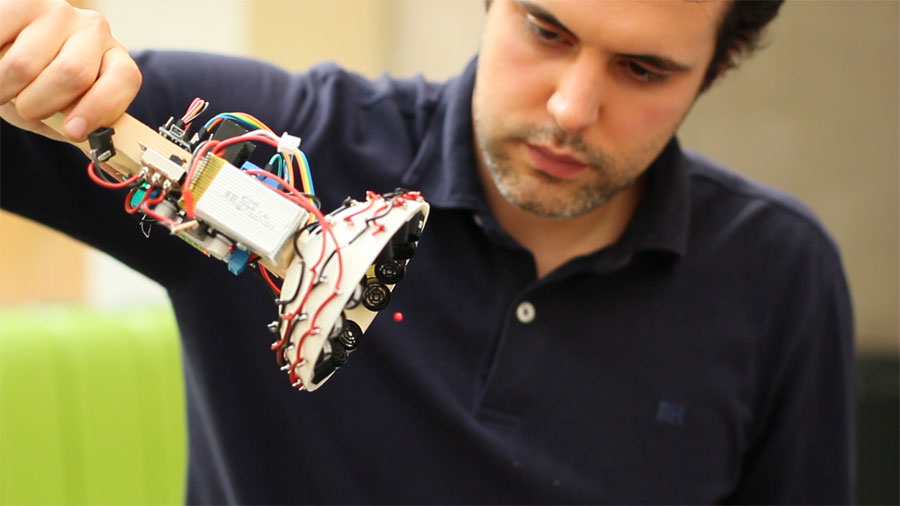 With those limitations overcome, the group developed the rest of the tractor beam system using easily accessible components, such as from the popular open-source electronics supplier, Arduino. They even produced a detailed how-to video for its construction, a link to which is included below. “There will be a set of instructions with a list of the needed components and a step-by-step video. The components are very simple, like an Arduino and a motor driver, and everything can be bought on Amazon for less than £50 (about $70),” Marzo said.

Besides seriously impressing dinner guests, these DIY tractor beams have many potential uses and may even become a new tool for studying low-gravity effects on biological samples. Marzo pointed out this type of “micro-gravity” research is already of interest and encouraged biologists to find their own applications for the device.

There are three designs of the device, each with trapping profiles suitable for different object sizes relative to the wavelength of sound used. However, even for the full lab implementation where the group traps heavier objects and even liquids, trapping objects larger than half the wavelength of sound still poses a challenge. For practical frequencies, just above what humans can hear, this limits the size of trappable objects to a few millimeters.

As Marzo and his group work to overcome this challenge and continue to improve the capabilities of their tractor beams, the democratization of their technology paves the way for untold uses and tweaks from the maker community. So, the question really is — what would you do with your own tractor beam?

The highlight video describing the device can be found at https://youtu.be/ixXaCD5bf0I.

The full how-to video for the device can be found at https://youtu.be/6YV0lou4L4c.