WASHINGTON, D.C. Sept. 6, 2013 — Researchers have developed a new technique to produce thin films of germanium crystals — key components for next-generation electronic devices such as advanced large-scale integrated circuits and flexible electronics, which are required for gadgets that move or bend. 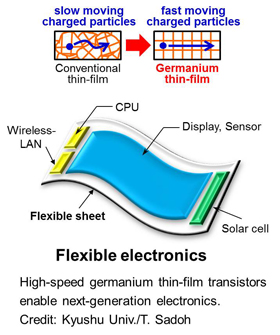 Unlike conventional methods, the new approach does not require high temperatures or other crystals to act as seeds to grow the germanium crystal. And, the researchers say, the new method can be used to produce germanium films with a very large area, allowing for more potential applications.

“This is the realization of the dreams of crystal-growth researchers,” says Taizoh Sadoh of Kyushu University. “This unique method will open new ways to create advanced flexible electronics.”

Sadoh is an author of the paper describing the new work, which appears in the AIP Publishing journal Applied Physics Letters.

Using gold as a catalyst, Sadoh and his colleagues were able to grow germanium crystals at a temperature of about 250° Celsius. They were also able to grow them in such a way that their crystal structure has the proper orientation and electrical properties necessary for technological applications.