WASHINGTON, D.C., September 2, 2014 – The Great Pacific Garbage Patch is an area of environmental concern between Hawaii and California where the ocean surface is marred by scattered pieces of plastic, which outweigh plankton in that part of the ocean and pose risks to fish, turtles and birds that eat the trash. Scientists believe the garbage patch is but one of at least five, each located in the center of large, circular ocean currents called gyres that suck in and trap floating debris.

Researchers from the University of New South Wales (UNSW), in Sydney, Australia, have created a new model that could help determine who’s to blame for each garbage patch – a difficult task for a system as complex and massive as the ocean. The researchers describe the model in a paper published in the journal Chaos, from AIP Publishing.

“In some cases, you can have a country far away from a garbage patch that’s unexpectedly contributing directly to the patch,” said Gary Froyland, a mathematician at UNSW. For example, the ocean debris from Madagascar and Mozambique would most likely flow into the south Atlantic, even though the two countries’ coastlines border the Indian Ocean.

The new model could also help determine how quickly garbage leaks from one patch into another, said Erik van Sebille, an oceanographer who collaborated with Froyland on the Chaos paper. “We can use the new model to explore, for example, how quickly trash from Australia ends up in the north Pacific.”

At the heart of the researchers’ work on the origins and fate of floating rubbish lies a bigger question – how well do the ocean’s surface waters mix?

THE ANATOMY OF OCEAN CURRENTS

Fast-moving ocean currents form due to winds, differences in water temperatures, salinity gradients across the globe, and the forces caused by the spinning Earth. Currents stir ocean waters, but they also serve as barriers that minimize mixing between different ocean regions, much like the blast of fast-moving air at the entrance of an air-conditioned store keeps the cold inside air from mixing with the warm outside air.

Froyland, van Sebille and their UNSW colleague, Robyn Stuart, divided the entire ocean into seven regions whose waters mix very little. Their approach borrowed mathematical methods from a field known as ergodic theory, which has been used to partition interconnected systems like the internet, computer chips and human society, and the new analysis revealed the underlying structure of the ocean without getting bogged down in complex simulations. 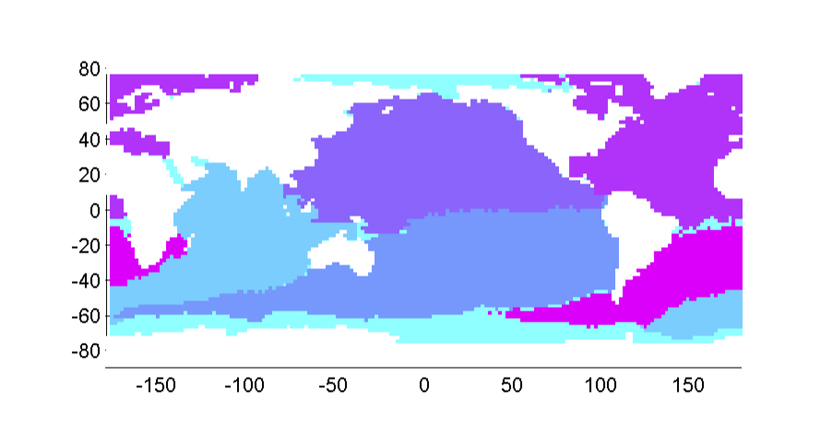 “Instead of using a supercomputer to move zillions of water particles around on the ocean surface, we have built a compact network model that captures the essentials of how the different parts of the ocean are connected,” said Froyland.

According to the new model, parts of the Pacific and Indian oceans are actually most closely coupled to the south Atlantic, while another sliver of the Indian Ocean really belongs in the south Pacific.

“The take-home message from our work is that we have redefined the borders of the ocean basins according to how the water moves,” said van Sebille. The geography of the new basins could yield insights into ocean ecology in addition to helping track ocean debris. The researchers say their modeling technique could also be applied on a smaller scale – determining for example how much Canadian and American waters mix in the Great Lakes or how an oil spill might spread in the Gulf of Mexico.

How well-connected is the surface of the global ocean?