The secret to geckos' amazing ability to adhere to ceilings and walls? A cool interplay of physics and, well, funky toe hairs on the bottom of their feet

WASHINGTON D.C. Aug. 12, 2014 — If you’ve ever spent any time watching a gecko, you may have wondered about their uncanny ability to adhere to any surface — including upside down on ceilings. It turns out the little lizards can turn the “stickiness” of toe hairs on the bottom of their feet on and off, which enables them to run at great speeds or even cling to ceilings without expending much energy.

“Since the time of the ancient Greeks, people have wondered how geckos are able to stick to walls — even Archimedes is known to have pondered this problem,” said Alex Greaney, co-author and an assistant professor of engineering at OSU. “It was only very recently, in 2000, that Kellar Autumn and colleagues proved unequivocally that geckos stick using van der Waals forces.”

Van der Waals forces are weak atomistic level forces, “but geckos are able to take advantage of them because of a remarkable system of branched hairs called ‘seta’ on their toes,” Greaney explained. “These seta and their hierarchy can deform to make intimate contact with even very rough surfaces — resulting in millions of contact points that each are able to carry a small load.”

Geckos — as well as spiders and insects — have independently evolved the same adhesion system mechanism and have been using it for millions of years.

“Understanding the subtleties of the process for switching stickiness on and off is groundbreaking,” said Greaney. “By using mathematical modeling, we’ve found a simple, but ingenious, mechanism allows the gecko to switch back and forth between being sticky or not. Geckos’ feet are by default nonsticky, and this stickiness is activated through application of a small shear force. Gecko adhesion can be thought of as the opposite of friction.”

Greaney and colleagues also found that the entire process is quite subtle, so a synergistic combination of angle, flexibility, and extensibility of the hairs exists that results in incredibly robust and tough adhesion — but still allow geckos to unstick without expending energy. 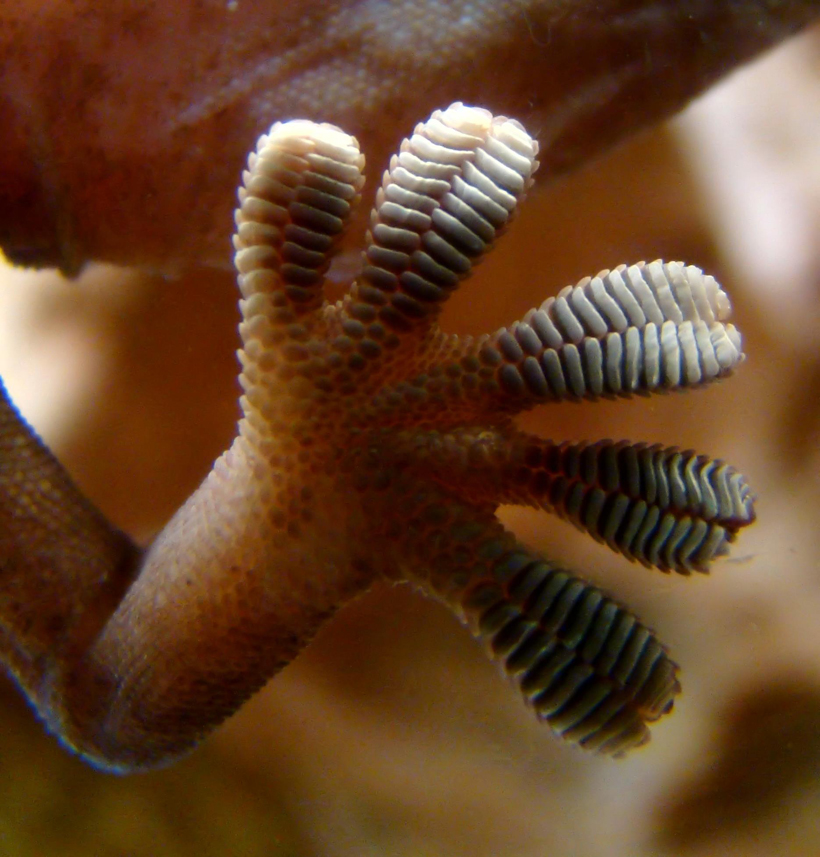 So, what kinds of applications will these findings enable? For the past 10 years, many researchers have been trying to create ‘synthetic dry-adhesives’ to replicate the gecko. In fact, these types of adhesives are already being used in climbing robots that can search through earthquake rubble in search of survivors.

One application of the team’s work will be put to use improving these synthetic adhesives. “While we don’t envision Mission Impossible sticky gloves, which are inspired by or based on the concept of gecko adhesion, we envision that robots will use gecko adhesion in extreme environments in the future,” Greaney said.

What’s next? “One of the really cool things that we’ve found is the way seta can absorb a large amount of energy, but also can recover it,” Greaney said. “Absorbing energy makes for a tough adhesive joint — for the gecko, it means it can catch itself after jumping or falling and also enables a gecko to rapidly dart off in different directions to avoid predation.”

It’s surprising that the easy detachment mechanism can recover this stored energy, so the researchers are interested in studying whether this is coupled with other aspects of the gecko’s physiology to enable it to take advantage of the recovered energy — much like a kangaroo does when bounding. “We’re also interested in exploring how this robust, but switchable behavior, has the collective behavior of seta in a hierarchical system,” Greaney added.

This journal article will be published 11:00 a.m., Friday, August 15, 2014. An earlier version of this release had a publication date of August 12.

Role of seta angle and flexibility in the gecko adhesion mechanism