WASHINGTON, D.C., March 27, 2018 — Single crystal tin selenide (SnSe) is a semiconductor and an ideal thermoelectric material; it can directly convert waste heat to electrical energy or be used for cooling. When a group of researchers from Case Western Reserve University in Cleveland, Ohio, saw the graphenelike layered crystal structure of SnSe, they had one of those magical “aha!” moments.

The group reports in the Journal of Applied Physics, from AIP Publishing, that they immediately recognized this material’s potential to be fabricated in nanostructure forms. “Our lab has been working on two-dimensional semiconductors with layered structures similar to graphene,” said Xuan Gao, an associate professor at Case Western.

The group’s work centers on the thermoelectric effect. They study how the temperature difference in a material can cause charge carriers — electrons or holes — to redistribute and generate a voltage across the material, converting thermal energy into electricity.

“Applying a voltage on a thermoelectric material can also lead to a temperature gradient, which means you can use thermoelectric materials for cooling,” said Gao. “Generally, materials with a high figure of merit have high electrical conductivity, a high Seebeck coefficient — generated voltage per Kelvin of temperature difference within a material — and low thermal conductivity,” he said.

A thermoelectric figure of merit, ZT, indicates how efficiently a material converts thermal energy to electrical energy. The group’s work focuses on the power factor, which is proportional to ZT and indicates a material’s ability to convert energy, so they measured the power factor of the materials they made. 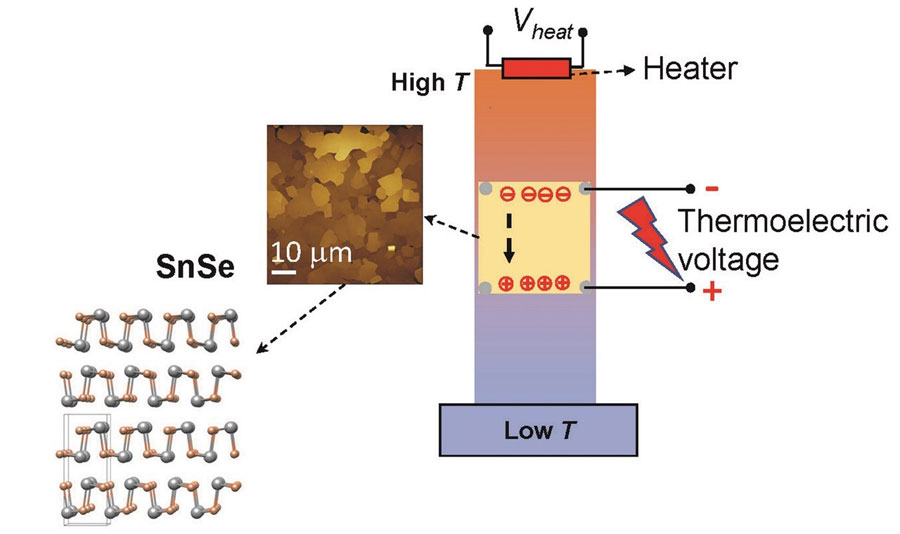 To grow SnSe nanostructures, they used a chemical vapor deposition (CVD) process. They thermally evaporated a tin selenide powder source inside an evacuated quartz tube. Tin and selenium atoms react on a silicon or mica growth wafer placed at the low-temperature zone of the quartz tube. This causes SnSe nanoflakes to form on the surface of the wafer. Adding a dopant element like silver to SnSe thin films during material synthesis can further optimize its thermoelectric properties.

At the start, “the nanostructure SnSe thin films we fabricated had a power factor of only ~5 percent of that of single crystal SnSe at room temperature,” said Shuhao Liu, an author on the paper. But, after trying a variety of dopants to improve the material’s power factor, they determined that “silver was the most effective — resulting in a 300 percent power factor improvement compared to undoped samples,” Liu said. “The silver-doped SnSe nanostructured thin film holds promise for a high figure of merit.”

In the future, the researcher hope that SnSe nanostructures and thin films may be useful for miniaturized, environmentally friendly, low-cost thermoelectric and cooling devices.