Described in the journal Applied Physics Letters, from AIP Publishing, the probes could be used to measure materials’ thermal fluctuations to better understand phenomena like friction and thermoelectricity. The probes may also be used to study temperature in biological systems, since diamond is biocompatible, and on a longer timescale, they might replace other sensors used in industry to monitor extreme environments like the inside of engines, combustion chambers, and high voltage systems.

The heart of the probe is a luminescent diamond defect called a Ni-based S3 defect center. It consists of a linear chain of 1 nitrogen atom, a vacancy, one nickel atom, another vacancy, and another nitrogen atom, all embedded in the crystalline structure of diamond.

“Although its structure seems complicated, it is a very common defect of diamond and, in particular, of artificial diamonds, since nickel is widely used as a synthesis precursor,” said Gilles Ledoux, a CNRS (French National Center for Scientific Research) researcher at the Institute of Light and Matter at the University of Lyon in France.

Like the majority of diamond defects, Ni-based S3 defect centers luminesce, meaning they emit light when excited by a laser pulse. The lifetime of the luminescence decreases as the temperature goes up. 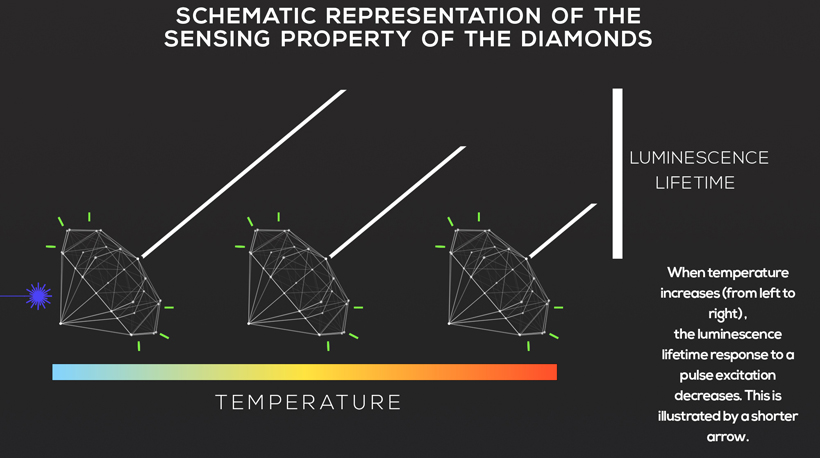 What makes the S3 defect special — and uniquely suitable to act as a temperature probe — is its electronic structure, which has two closely spaced excited energy levels with a thousand-fold difference in radiative lifetimes. The difference means the luminescence is strongly sensitive to temperature variation, the researchers said.

The team tested the probes by attaching micro-diamonds with Ni-based S3 defect centers on silicon and inserting them into a cryostat, a piece of equipment that could control the temperature from 77 degrees Kelvin (-196 degrees Celsius/-321 degrees Fahrenheit) up to 873 Kelvin (600 degrees Celsius/1,112 degrees Fahrenheit). The best results exhibited an accuracy of better than 1 degree Celsius.

The versatility of the diamond temperature probes, combined with their high performance, sets them apart from other luminescent temperature sensors, the researchers said.

“This sensor combines good sensitivity, fast response speed, a huge range of use, from 150 degrees Kelvin to 850 Kelvin, and a potentially good spatial resolution, only limited by the size of the diamond particles,” said Estelle Homeyer, another member of the research team. “For each of these criteria one can find a slightly better [sensor] candidate, but none that can combine all of them,” she said.

Perhaps the best advantage of the microdiamond temperature probes, according to the researchers, is that they can detect fast thermal variations, meaning they could be used to measure different materials’ thermal properties down to the microscale or potentially nanoscale, if nano-sized probes can be produced.

Universite de Lyon and Institute of Physics AS CR