A team of researchers from Japan successfully fabricated a key circuit in power conversion systems using hydrogenated diamond (H-diamond.) Furthermore, they demonstrated that it functions at temperatures as high as 300 degrees Celsius. These circuits can be used in diamond-based electronic devices that are smaller, lighter and more efficient than silicon-based devices. The researchers report their findings this week in Applied Physics Letters, from AIP Publishing.

Silicon’s material properties make it a poor choice for circuits in high-power, high-temperature and high-frequency electronic devices. “For the high-power generators, diamond is more suitable for fabricating power conversion systems with a small size and low power loss,” said Jiangwei Liu, a researcher at Japan’s National Institute for Materials Science and a co-author on the paper.

In the current study, researchers tested an H-diamond NOR logic circuit’s stability at high temperatures. This type of circuit, used in computers, gives an output only when both inputs are zero. The circuit consisted of two metal-oxide-semiconductor field-effect transistors (MOSFETs), which are used in many electronic devices, and in digital integrated circuits, like microprocessors. In 2013, Liu and his colleagues were the first to report fabricating an E-mode H-diamond MOSFET. 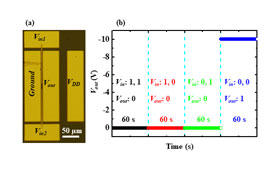 In the future, the researchers plan to improve the circuit’s stability at high temperatures by altering the oxide insulators and modifying the fabrication process. They hope to construct H-diamond MOSFET logic circuits that can operate above 500 degrees Celsius and at 2.0 kilovolts.

“Diamond is one of the candidate semiconductor materials for next-generation electronics, specifically for improving energy savings,” said Yasuo Koide, a director at the National Institute for Materials Science and co-author on the paper. “Of course, in order to achieve industrialization, it is essential to develop inch-sized single-crystal diamond wafers and other diamond-based integrated circuits.”