Russian researchers develop calculations to explain the production and dynamics of positrons in the hole-boring regime of ultrahigh-intensity laser-matter interactions.

WASHINGTON, D.C., September 27, 2016 — Dramatic advances in laser technologies are enabling novel studies to explore laser-matter interactions at ultrahigh intensity. By focusing high-power laser pulses, electric fields (of orders of magnitude greater than found within atoms) are routinely produced and soon may be sufficiently intense to create matter from light.

Now, intriguing calculations from a research team at the Institute of Applied Physics of the Russian Academy of Sciences (IAP RAS), and reported this week in Physics of Plasmas, from AIP Publishing, explain the production and dynamics of electrons and positrons from ultrahigh-intensity laser-matter interactions. In other words: They’ve calculated how to create matter and antimatter via lasers. 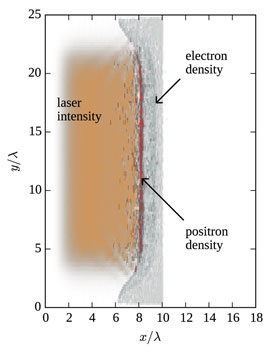 Strong electric fields cause electrons to undergo huge radiation losses because a significant amount of their energy is converted into gamma rays — high-energy photons, which are the particles that make up light. The high-energy photons produced by this process interact with the strong laser field and create electron-positron pairs. As a result, a new state of matter emerges: strongly interacting particles, optical fields, and gamma radiation, whose dynamics are governed by the interplay between classical physics phenomena and quantum processes.

A key concept behind the team’s work is based on the quantum electrodynamics (QED) prediction that “a strong electric field can, generally speaking, ‘boil the vacuum,’ which is full of ‘virtual particles,’ such as electron-positron pairs,” explained Igor Kostyukov of IAP RAS. “The field can convert these types of particles from a virtual state, in which the particles aren’t directly observable, to a real one.”

One impressive manifestation of this type of QED phenomenon is a self-sustained laser-driven QED cascade, which is a grand challenge yet to be observed in a laboratory.

But, what’s a QED cascade?

For this work, the researchers explored the interaction of a very intense laser pulse with a foil via numerical simulations.

“We expected to produce a large number of high-energy photons, and that some portion of them would decay and produce electron-positron pairs,” Kostyukov continued. “Our first surprise was that the number of high-energy photons produced by the positrons is much greater than that produced by the electrons of the foil. This led to an exponential — very sharp — growth of the number of positrons, which means that if we detect a larger number of positrons in a corresponding experiment we can conclude that most of them are generated in a QED cascade.”

They were also able to observe a distinct structure of the positron distribution in the simulations — despite some randomness of the processes of photon emission and decay.

“By analyzing the positron motion in the electromagnetic fields in front of the foil analytically, we discovered that some characteristics of the motion regulate positron distribution and led to helical-like structures being observed in the simulations,” he added. 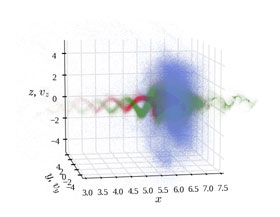 The team’s discoveries are of fundamental importance because the phenomenon they explored can accompany the laser-matter interaction at extreme intensities within a wider range of parameters. “It offers new insights into the properties of these types of interactions,” Kostyukov said. “More practical applications may include the development of advanced ideas for the laser-plasma sources of high-energy photons and positrons whose brilliance significantly exceeds that of the modern sources.”

So far, the researchers have focused on the initial stage of interaction when the electron-positron pairs they produced don’t significantly affect the laser­­-target interaction.

“Next, we’re exploring the nonlinear stage when the self-generated electron-positron plasma strongly modifies the interaction,” he said. “And we’ll also try to expand our results to more general configurations of the laser–matter interactions and other regimes of interactions — taking a wider range of parameters into consideration.”

Production and dynamics of positrons in ultrahigh intensity laser-foil interactions

Institute of Applied Physics of the Russian Academy of Sciences