WASHINGTON, D.C., April 5, 2016 – Turn on an electric field, and a standard electrocaloric material will eject heat to its surroundings as its internal dipoles reorder themselves. Do the same thing, and a negative electrocaloric material will absorb heat, cooling the environment, thanks to the blend of ferroelectric polymers that make up each. While these materials have been investigated as a method of on-demand microclimate control for quite some time, there’s a catch – the external field needs to remain active, which is energy-consuming and ends up heating the material. Recently, however, researchers at Pennsylvania State University have developed a unique blend of ferroelectric polymers which can hold absorbed heat even after the external field has been switched off – a system which could be adapted for a variety of small-scale systems.

In a typical electrocaloric material, heating and cooling are only generated when the field is changing in response to a full electric pulse. Here, the amount of heating is slightly greater than the amount of cooling, with the difference depending on the material’s efficiency.

“The advantage of the electrocaloric material is its very high efficiency, compared with other solid state coolers, such as the thermoelectric cooler,” said Xiaoshi Qian, a post-doctoral scholar and primary investigator on project. According to Qian this can be attached to a chip or a biological system in need of on-demand cooling.

Qian and his colleagues, including Qiming Zhang, also a professor at Penn State, describe their novel hybrid dielectric material this week in Applied Physics Letters, from AIP Publishing.

This allows the materials to either add or remove heat from a system through an internal reordering of dipoles – the separation of positive and negative charges.

According to Qian, the bulkier third monomer CFE in the terpolymer introduces defects in its polymer chain, causing it to exhibit dipolar randomness rather than the ferroelectric ordering shown in the copolymer. When these form a finely-tuned blend, the resulting hybrid can be poled into one dipolar direction with an electric pulse, owing to the formation of strong macroscopic ferroelectric domains. Then, when subjected to a second, smaller pulse, the material becomes depoled, or randomly poled, and maintains this state.

This allows their ferroelectric material to not only maintain a large cooling effect when a voltage is applied, but after it has been removed.

Their experimental cycle consists of two electric pulses which operate in bipolar directions. The first pulse orders the hybrid’s poles into a macroscopic polar-state, followed by a second de-poling pulse which transitions the material to a dipole random state. This yields a large cooling effect when the polymer blends display a large entropy increase due to the disordering.

“We would like to improve the electrocaloric materials in the future so that the cooling generated upon an electric pulse in the EC material can be much larger,” Qian said. “This study is the first step toward that direction.” 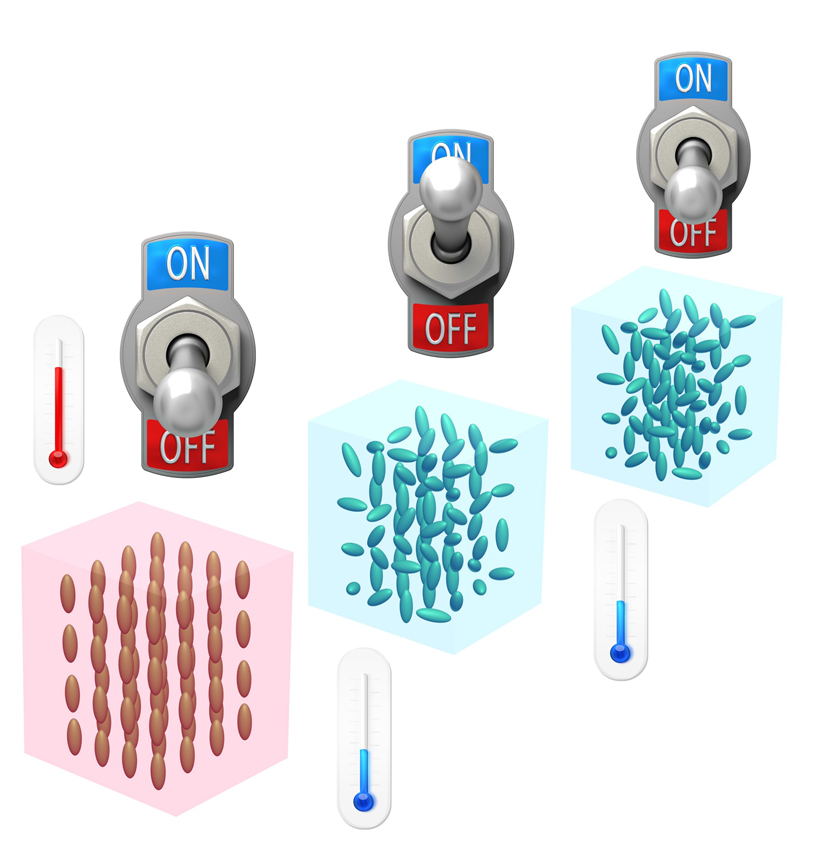