You're not imagining it -- traffic within cities really is more chaotic, according to a new mathematical analysis by a team of researchers in Colombia and Chile.

WASHINGTON, DC, July 21, 2015 – It’s not unusual for two drivers to depart from the same location, head out to the same destination, drive more or less the same speed and nevertheless arrive at dramatically different times, with one driver taking significantly longer to arrive. While this can simply be bad luck, sometimes the reason isn’t an obvious external event.

And if you are a world traveler, you’ve likely noticed the fact that transportation works like a charm in some countries, in the sense that you can plan your commute or trip via public bus with confidence. The busses in some places will pick you up and drop you off at your destination in time and on schedule. Yet in other places, adherence to bus schedules is a complete mess.

While these two sets of observations may appear unrelated, they inspired a team of researchers in Colombia and Chile to explore the role of chaos in the dynamics of vehicles within cities. This week in the journal Chaos, from AIP Publishing, the team presents and analyzes the consequences of “discrete mapping” the exact evolution of a bus operating under ideal city conditions.

“Systems with chaotic dynamics have a very short time horizon for predictability — which helps to explain scheduling problems with buses — and trajectories that originate close to each other can have different behaviors,” said Jorge Villalobos, the paper’s lead author and the dean of the faculty of Natural Sciences and Mathematics at the Universidad de Ibagué in Colombia.

Several more elaborate models already exist for studying city traffic, but Villalobos and his team wanted to see what insights (intuitive or otherwise) they could find from a simple model, hoping that simplicity could lend some clarity to a complex and substantial issue.

To delve into these chaotic dynamics, the team built a very simple model of a bus that interacts with traffic lights and stops at a bus stop to pick up passengers between them. Think of it as a driverless bus — being driven by a robot like a Google car. “We use it to explore under which conditions the interaction with traffic lights is chaotic or not. And to do this, we change the way the traffic lights change from red to green,” said Villalobos.

A number called the “Lyapunov exponent” can be used to characterize chaos in a dynamical system. “If this number is positive, we have a chaotic system with low predictability,” explained Villalobos. “We identify the combination of parameters — basically the way the traffic lights behave — for which we encounter positive Lyapunov exponents to identify situations for which the traffic lights make the bus trajectory chaotic and unpredictable in time or not.”

To be more precise, if a bus in the team’s model is in a chaotic trajectory, it would be extremely difficult to predict when it will arrive at a bus stop several traffic lights ahead. But, on the other hand, if the bus is on a non-chaotic trajectory it’s easy to predict its arrival time.

Beyond being a fun way to help you scientifically back up and defend your beliefs at cocktail parties or wherever else you happen to find yourself debating the topic of whether or not traffic within cities is chaotic, the researchers’ work shows that part of the problem is that, in some situations, bus or car trajectories are chaotic. 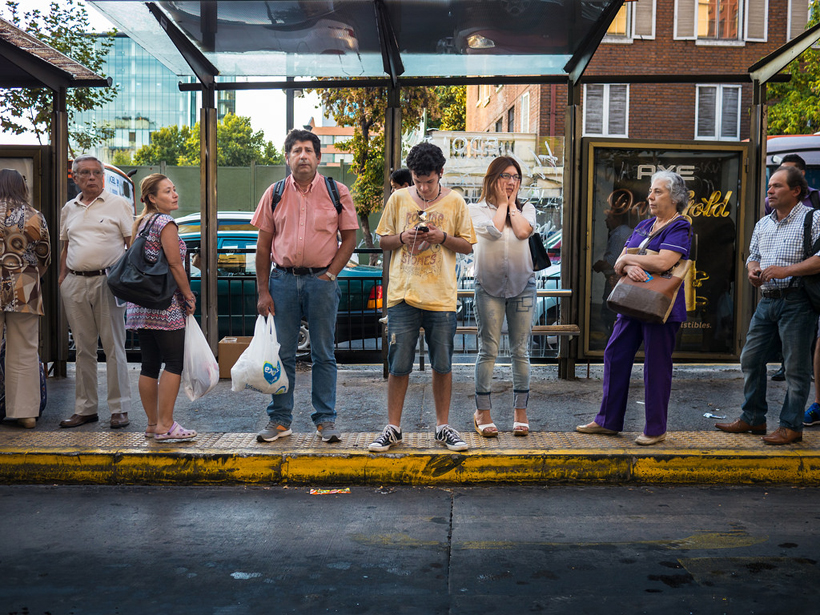 The immediate applications for their findings are minimal, because they’re studying a system with only one vehicle. “The biggest implication is that we show that chaos is an inherent part of city vehicle dynamics,” said Villalobos.

As a next step, the team is exploring a slightly modified model that involves different types of driver behaviors, such as comparing calm drivers who brake slowly vs. aggressive drivers who brake abruptly. “We’re working toward different ways of measuring our results in physical systems — scaled or real systems — and also exploring new models so that we can observe interactions between vehicles,” added Villalobos.

Modeling a bus through a sequence of traffic lights