Using Magnets and Opposing Jets, Researchers in France and England Create the Optimal Industrial Mixer, Which Creates a Pattern that Resembles a Cat's Eye

WASHINGTON, D.C. Oct. 29, 2013 — As any amateur baker knows, proper mixing is crucial to a perfect pastry. Mix too little and ingredients will not be evenly distributed; beat instead of fold, and a soufflé will fall flat. Mixing strategies are even more critical for industrial products, where every batch that is manufactured must meet the same exacting standards and yet, to manage costs, be created in the least amount of time.

In a new paper published in the journal Physics of Fluids, fluid mechanics expert Lionel Rossi, a researcher at the French Alternative Energies and Atomic Energy Commission  (CEA), and his colleagues from Imperial College London describe a new recipe for industrial mixing with the potential to optimize mixers. 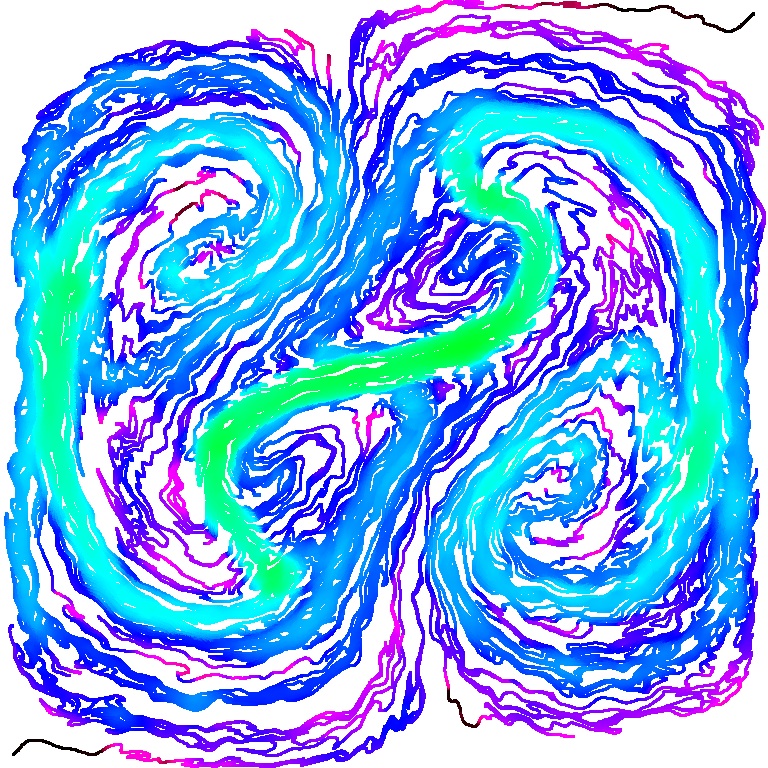 The process uses magnets to generate synchronized flows of jets that move in opposite directions and whose positions are slightly offset from each other. By controlling the timing of the jets and their strength and position, the researchers created a promising mixing sequence called a “cat’s eyes flip flow,” named because the resulting pattern, as visualized with colored dyes added to the solution, resembles the delicate almond shape of a cat’s eye. They studied the flows created by this sequence and compared them to other patterns, and found that the cat’s eyes flip flows were most efficient at mixing solutions.

“The new sequence is both robust and fast, and its relative simplicity makes it transferable to mixing devices at all scales,” Rossi said. At very small scales, he noted, the sequence should help reduce mixing times and possibly even the space required for mixing. This would be of interest for lab-on-a-chip applications “that require numerous manipulations in a minimum of time and space,” Rossi said. At larger scales, he continued, “the sequence should increase performance while reducing energy consumption,” for example by reducing the stirring of saturated regions, making the process more environmentally friendly.

Next, the researchers plan to develop tailored mixing strategies applicable to almost any mixing need, by using different sequences of synchronized flows as building blocks.