Scientists have developed a simulation model to take the guesswork out of calculating the influence of roughness on mechanical properties of a sphere. 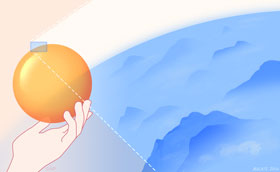 WASHINGTON, D.C., May 31, 2016 — The scientific community uses spheres for all sorts of things — artificial limbs, cars, molecular chemistry — but there’s always a little uncertainty when this geometric shape is introduced into an experiment. While spheres might look smooth and round to the naked eye, their surfaces are far from it. Even a ball bearing, when held up to intense scrutiny, is riddled with peaks and valleys. These inconsistencies change how the spheres interact with the world and can cause problems for everything from surface measurements to the strength of electrical currents.

A transatlantic team of researchers explain the creation of a simulation model that can help scientists mathematically correct for any errors related to a sphere's roughness this week in Applied Physics Letters, from AIP Publishing.

“Devices that measure surfaces typically use spheres — the stylus,” said Lars Pastewka, a material scientist at Karlsruhe institute of Technology in Germany and the leader of the transatlantic team. “Most researchers assume that the [stylus is] smooth and surface roughness is ignored.”

The team's calculations are designed to tell a scientist when they should worry about surface roughness, which should make measurements more accurate, Pastewka explained.

Pastewka and Robbins looked at the surface of spheres on the atomic level. They studied how the roughness — those irregular peaks and valleys — interacted mechanically with the surfaces they were pushed against to form areas of intimate atomic contact. By running simulations, Pastewka was able to formulate a mathematical expression that demonstrates how spheres with different types of peaks and valleys will deform when they’re met with various amounts of pressure.

While it is possible to create a near perfectly spherical object, most scientists can’t afford to do so. Knowing how to correct the imperfections mathematically is the cheapest and most plausible way to tackle this problem.

Pastewka and Robbins’ equation shows that the steeper the surface peaks are, the smaller the contact area. This could be exploited to minimize friction that sphere will create when sliding on a surface. But, if the slopes are too steep, they’re likely to get damaged.

For spheres meant to conduct electricity, scientists would most likely want lower peaks so more of the sphere is in contact with the medium. But, if a surface becomes too flat, it will stick to the medium it’s pushed up against — and could get stuck permanently. In both cases, there’s a sweet spot that Pastewka’s equation should help scientists achieve.

“Surfaces that are really flat will stick together, and you don’t really want them to stick,” Pastewka said. “Surface roughness has the important function of separating interfaces while still allowing interaction.”

So far, the team has only looked at how the peaks and valleys react to elastic and adhesive surfaces. Elastic surfaces are like balloons, you can poke them and they bounce back to their original shape. The next step is to focus on plastic surfaces, which will change shape permanently when under pressure.

“The future direction is plasticity, going beyond these elastic calculations [and] allowing the solid to permanently change,” Pastewka said.