WASHINGTON, D.C., May 10, 2016 – In the world of particle accelerators, laser wakefield devices are the small, but mighty upstarts. The machines can accelerate electrons to near the speed of light using a fraction of the distance required by conventional particle accelerators. However, the electrons are not all uniformly accelerated and beams with a mix of faster (higher energy) and slower (lower energy) particles are less practical.

Now a team of researchers from China, South Korea and the U.S. has proposed a new way to minimize the energy spread of electrons in laser wakefield accelerators. They publish their method in the journal Physics of Plasmas, from AIP Publishing.

Laser wakefield accelerators work by shooting an ultrafast laser pulse through a plasma. Plasmas contain positively charged ions and free electrons. As the laser plows through the plasma, it pushes the electrons out of the way, leaving behind a region of positively charged ions. The positive charge pulls electrons back in behind the laser pulse in waves. These plasma waves in turn generate strong electric fields that trap electrons and can accelerate them to energy levels on the order of one billion electron volts, which means the electrons are zipping by at around 99.99999 percent the speed of light.

“Along the axis that the laser propagates, the longitudinal electric field resembles a very steep ocean wave about to break, which will cause electrons trapped near the rear to feel a very strong forward acceleration,” said Jiansheng Liu, a physicist with the Chinese Academy of Sciences.

The acceleration is so strong that laser wakefield devices can boost electrons to ultra-high-energy levels in mere centimeters, a feat that would take the most advanced conventional accelerators many meters to accomplish.

However, there are downsides to laser wakefield accelerators. First, electrons may enter the plasma wave at different times and the electrons that enter first are accelerated for longer. Second, the acceleration is not uniform, so electrons at different locations receive different energy boosts. Both these factors contribute to an energy spread for the accelerated electrons – an undesirable feature for practical applications.

Liu and his colleagues propose a novel way to minimize the energy spread. After the electrons enter the plasma wave, but before they are accelerated, the team proposes inserting a plasma compressor. The compressor squeezes the electrons together and also flips their order, so that the fast electrons that were at the front of the pulse are now at the back. 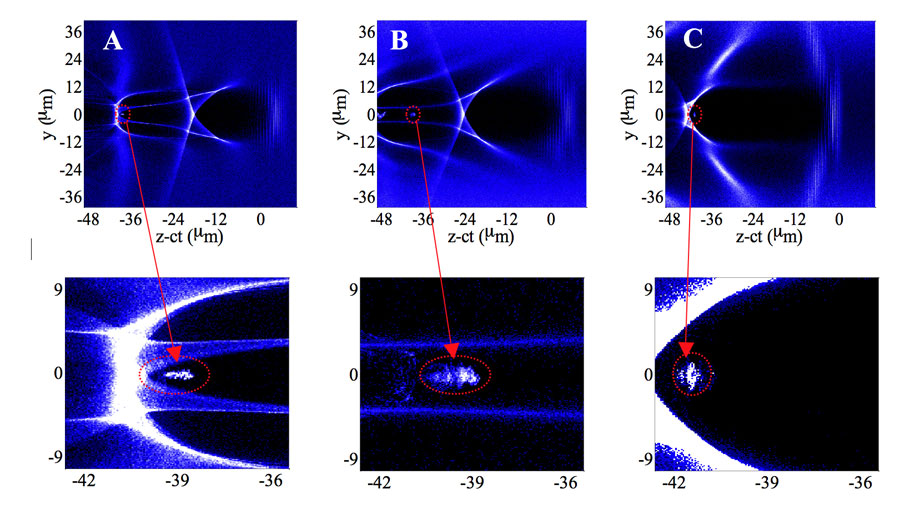 Previous efforts to minimize the energy spread by optimizing the electron injection process or shaping the acceleration field produced particles whose energy levels varied by several percentage points. The new scheme should be able to reduce the energy spread to the one-thousandth level, more than 10 times better.

X-ray free-electron lasers generate flashes of X-ray light short and intense enough to make movies of chemical reactions and other ultrafast phenomena, but the electrons must have a very tight energy spread to generate the coherent X-rays necessary for a clear picture. Current X-ray free-electron lasers are huge machines housed at national facilities like SLAC, the national accelerator laboratory in Menlo Park, California.

Liu and his colleagues are currently working on plans to test their proposed method by building a device in the lab.