New research reveals that commercially available beta peptide sequences can still self-assemble when other organic molecules are placed inside them, allowing for more robust bioscaffolds. 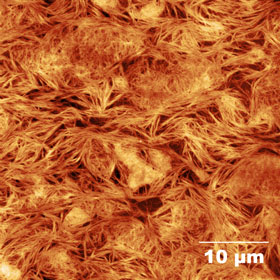 WASHINGTON, D.C., May 7, 2018 — Designing bioscaffolds offers bioengineers greater flexibility when it comes to tissue engineering and biomedicine. Systems that use self-assembling peptides can create a variety of materials. Beta peptides have especially become a key tool in building more robust biomaterials. These synthetic molecules mimic the structure of small proteins, but they are protected against processes that degrade natural peptides. A new study has expanded what we can do with these crafty peptides.

For the first time, researchers have shown it is possible to attach self-assembling beta peptides onto different organic molecules. Published in APL Bioengineering, from AIP Publishing, the study shows that molecules that have previously posed challenges to bioengineers can now be used to make new kinds of biomaterials. The team tested different compounds bound to beta peptides to make a variety of beta-foldamers, including a scaffold on which nerve cells could grow.

Structurally, amino acids are groups of carbon atoms bookended by an amine group on one side, an acidic group on the other, and bound to various residues that give them each unique properties. In nature, most are known as alpha amino acids, meaning only one carbon atom holds all of these parts together. Beta amino acids divide up the work between two carbon atoms.

In beta peptides, the extra carbon makes the molecules hardier against peptide-breaking enzymes in the body. Beta peptides can also self-assemble. A bioengineer simply needs to cap the amino end of beta peptides, and they will build the sticky molecules themselves.

“We were quite surprised that a very small peptide was able to still assemble, despite the fact that there was something in the middle of it,” said Mark Del Borgo, an author on the paper.

“One cool thing about these is that they are completely sequence-independent,” Del Borgo said. “No matter how they are made up, they assemble entirely on their own.”

The team investigated flexible and rigid linking molecules for the filler of their beta-foldamers, focusing on arginylglycylaspartic acid (RGD.) This alpha peptide sequence found in the extracellular matrix acts as a template for placing cells correctly as they start to spread.

Using beta-foldamers with RGD at the center, the team constructed a mesh on which they cultured a network of neurons. They found that the neurons properly conduct impulses between one another and shared information.

For Del Borgo and his team, beta peptide-based structures might provide the bioscaffolding for brain meshes that can help coordinate the growth of neurons after a patient experiences a stroke or traumatic brain injury. Next up, the group plans to investigate how bioscaffolds can help treat the neurological deficits of mice with these conditions.