Washington, D.C., May 5, 2015 – Radiation detectors, which monitor high-energy particles such as those produced by nuclear decay and cosmic radiation, are being used increasingly in medical imaging, petroleum well logging, astronomy and national security. Conventional semiconductor detectors made from germanium and silicon are standard equipment in nuclear physics, but are less useful in many emerging applications because they require low temperatures to operate. In recent years, scientists have been seeking new semiconductor materials to develop high-performance radiation detectors that can operate at room temperature.

Now researchers from Oak Ridge National Laboratory in Tennessee think they have a good candidate material. The scientists studied for the first time native defects and dielectric properties of an emerging semiconductor compound called thallium sulfide iodide (Tl6SI4). Using a computational modeling method called density functional calculations, the researchers demonstrated the material’s potential for creating high-performance, low-cost, room-temperature semiconductor radiation detectors. In a paper published this week in the Journal of Applied Physics, from AIP Publishing, the researchers report their calculations and findings.

Native defects, a type of structural flaw in which the regular pattern of atoms is naturally altered during crystal growth, play an important role in charge carrier trapping and recombination in semiconductors. Defects affect the charge transport in the material and ultimately the radiation detection efficiency of a device. “From the theoretical study, we have identified the most detrimental defects that hinder the electron transport in thallium sulfide iodide and proposed methods that could be implemented in crystal growth to suppress the formation of unwanted defects,” Du said. 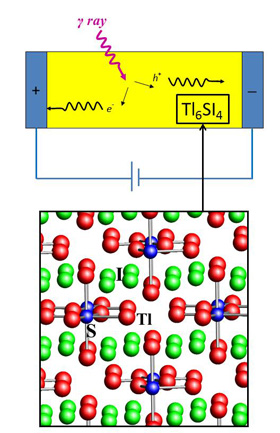 The Limits of Conventional Radiation Detectors

Semiconductor radiation detectors are devices that measure ionizing radiation by collecting radiation-generated charge carriers in the semiconductor between electrodes under a bias voltage. Conventional semiconductor detectors such as germanium and silicon require low temperatures to operate, which limits their applications outside of laboratories. For example, germanium detectors must be cooled to liquid nitrogen temperature (about 77 Kelvin or -196 degrees Celsius) to produce spectroscopic data.

In recent years, scientists have been seeking new materials for room-temperature radiation detectors. A semiconductor material called cadmium zinc telluride (CdZnTe) has been found to be the best candidate to date, but it suffers from the difficulty of growing large-size high-quality single crystals, making it difficult and expensive to incorporate in commercial detectors. Researchers are still searching for a material with improved performance and lower cost that is suitable for commercial production, Du said.

According to Du, a good semiconductor candidate should be a dense material and contain heavy chemical elements so that it can effectively stop and absorb high-energy radiation. Also, in order to work properly at room temperature, the material should have a reasonably large band gap (the energy difference between the top of the valence band and the bottom of the conduction band in semiconductors) and high resistivity to suppress thermally generated charge carriers for precisely detecting radiation-generated carriers. Moreover, the detector materials need to have excellent carrier transport efficiency to make sure radiation-generated charges effectively diffuse through the crystal and reach the electrodes.

A good radiation detection material should have efficient charge transport property, Du said. Native defects, the natural structure flaws in a semiconductor, can interact with charge carriers, causing carrier trapping and scattering, thus harming the carrier transport process. Studying the native defects and their effects on charge transport in a material are hence essential for the performance improvement of a radiation detector.

In the study, Du and his co-worker, Hongliang Shi, another researcher from Oak Ridge National Laboratory, used a theoretical modeling method called density functional calculation to study native defects, defect complexes and dielectric properties of thallium sulfide iodide. They found that most of the native defects in the material are not “deep defects,” which means they won’t cause serious carrier trapping. For the most detrimental defects, the researchers proposed methods to mitigate the problems. The calculation also showed that thallium sulfide iodide has high static dielectric constant, which could reduce the Coulomb interaction between the charged defects and charge carriers, thus reducing carrier scattering and trapping.

“The defect and dielectric properties, combined with other good properties such as large band gap, high density, low melting temperature and so on, suggest that thallium sulfide iodide is a good candidate for fabricating new generation room-temperature radiation detectors with improved performance and lower cost than previous detectors,” Du said.

The researchers’ next step is to study impurities, impurity-defect complexes and their effects on carrier transport in thallium sulfide iodide.