Researchers at Duke University and the University of British Columbia are exploring whether surfaces can shed dirt without being subjected to fragile coatings.

WASHINGTON, D.C., July 5, 2016 – Scalpels that never need washing. Airplane wings that de-ice themselves. Windshields that readily repel raindrops. While the appeal of a self-cleaning, hydrophobic surface may be apparent, the extremely fragile nature of the nanostructures that give rise to the water-shedding surfaces greatly limit the durability and use of such objects. 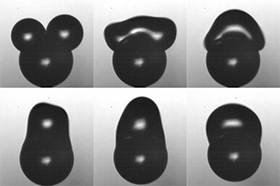 To remedy this, researchers at Duke University in Durham, North Carolina and the University of British Columbia in Vancouver, Canada, are investigating the mechanisms of self-propulsion that occur when two droplets come together, catapulting themselves and any potential contaminants off the surface of interest. They ultimately hope to determine whether superhydrophobicity — a surface that is impossible to wet — is a necessary requirement for self-cleaning surfaces.

“The self-propelled catapulting process is somewhat analogous to pogo jumping,” said Chuan-Hua Chen, an associate professor in the Department of Mechanical Engineering and Materials Science at Duke University. He and his colleagues present their work this week in Applied Physics Letters, from AIP Publishing.

When the droplets coalesce, or come together on a solid particle, they release energy – analogous to the release of biochemical energy of a human body on a pogo stick. The energy is then converted through the interaction between the oscillating liquid drop and the solid particle – analogous to the storage and conversion of energy by the spring mechanism of the pogo stick.

“In both cases, the catapulting is produced by internally generated energy, and the ultimate launching comes from the ground that supports the payload – the solid particle or the pogo stick,” Chen said.

“The solution suddenly occurred to us while we were examining the drop coalescence process with numerical simulations by my student Fangjie Liu. The coalescence of two droplets on a particle can provide the source of energy to catapult the particle, much like pogo jumping,” Chen said. “Guided by this insight, another student, Roger Chavez, inkjet-printed two droplets on a solid particle, which rests on a supporting substrate. As the droplets coalesce, the merged drop not only jumps away from the supporting substrate, but also carries the solid particle along with it.”

“Since neither the solid particle nor the supporting substrate are superhydrophobic, we clearly demonstrated the feasibility of coalescence-induced self-cleaning without resorting to superhydrophobic surfaces,” he concluded.

In addition to self-cleaning engineering systems, future work for Chen and his colleagues includes developing laboratory models for a related phenomenon, ballistospore launch triggered by drop coalescence on fungal spores, which has been observed on thousands of fungi species but has only been previously studied on live spores.