WASHINGTON, D.C., October 31, 2016 — Artificial muscles made significant gains when a literal twist in the development approach uncovered the tensile — or stretchy — abilities of polymer fibers once they were twisted and coiled into a spring-like geometry. In a similar manner to the powerful climbing tendrils of cucumber plants, the unique geometry gives the coil a flexing motion when fiber material shrinks — a reaction that can be controlled with heat. Now, researchers have improved these tensile properties even further by focusing on the thermal properties of the polymer fiber and the molecular structure that makes best use of the chiral configuration.

In the cover article appearing this week in Applied Physics Letters, from AIP Publishing, Guoqiang Li and his team in the Department of Mechanical and Industrial Engineering at Louisiana State University discuss how they have developed a new fiber that offers higher tensile stroke and is triggered — or actuated — at temperatures more than 100 degrees Celsius cooler than its predecessors.

“We analyzed the principle behind why the polymer fiber, through twisting and coiling, can behave so remarkably,” said Li, explaining their methodology. According to Li, they found two driving factors: the untwisting nature of the fiber during actuation and the negative coefficient of thermal expansion (NCTE). The two-way shape memory polymer (2W-SMP) fiber Li and his team developed addressed both of these factors.

When it comes to the untwisting that drives this chiral-upon-chiral architecture to flex and contract, Li’s group focused on this issue at the molecular level. The reversible responses of the 2W-SMP polymer that make them ideal come from a stable molecular network of chemical cross links. The network provides chains of oriented molecules in the polymer whose melting and recrystallization gives rise to the important memory characteristics of the fiber.

The reversible melt/crystallization transition also provided better thermal expansion properties compared to standard fibers, where actuation comes from the intrinsic contraction of the polymer components in the presence of heat (and relaxation when the heat is removed). The 2W-SMP fiber demonstrates thermal expansion/contraction an order of magnitude higher than the NCTE of its predecessors.

By addressing these two characteristics, the fibers Li produced and tested in their twisted-then-coiled muscle configurations showed greater tensile actuation, but they also brought down the temperature needed to actuate these artificial muscle fibers.

The low temperature is significant when considering a host of applications related to human body temperature beyond just medical devices, including breathable textiles and self-healing materials whose structures adapt to environmental changes.

Li and his team still face challenges with the performance of the fiber’s specific work as well as efficiency in converting thermal energy into actuation, and look to address these issues in future work. One potential approach may be to incorporate conductive reinforcement into the material with carbon nanotubes.

“Our polymer is very soft. So by adding some reinforcement, like carbon nanotubes, we’d have two benefits,” Li said. “The first one makes it into a conductor, that means we can also use electricity and have it trigger the muscle behavior. The other is that the carbon nanotube will increase the stiffness.” Greater stiffness means better energy storage for the fiber, which in turn increases the energy conversion efficiency. 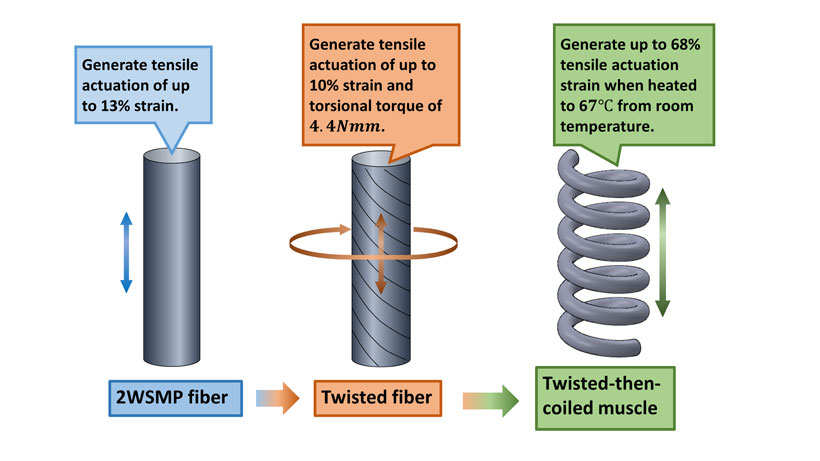