Doctors may soon be able to see a live video of a patient’s heart beating, eliminating the need for invasive surgeries used to diagnose and localize cardiac conditions.

WASHINGTON, D.C., October 16, 2018 — Doctors use invasive procedures to map the hearts of patients suffering from atrial fibrillation, an abnormal heart rhythm, to decide whether an ablation procedure to remove heart tissue is likely to have a positive outcome. Computed tomography (CT) scans or ultrasounds are useful in determining the structure of a patient’s heart, but invasive electrical procedures are used to identify and localize the source of the atrial fibrillation.

A group of researchers from the University of California, Santa Barbara developed new algorithms to localize the source of an atrial fibrillation. They report their findings in the journal APL Bioengineering, from AIP Publishing.

“Electrical sources in your heart produce signals that permeate through your cardiac and body tissue to produce body-surface signals that we measure as [an ECG, or electrocardiogram], said UC Santa Barbara graduate student Abhejit Rajagopal, an author on the paper.

“Using these signals, we can try to reconstruct what’s going on inside your heart,” Rajagopal said. “This is typically done by assuming a model for the propagation of signals from your heart to the surface and inverting it. The ‘inverted’ model is known as an inverse operator. Typically, if the forward model is linear so is the inverse operator.”

The main concept underlying the UC Santa Barbara group’s work is that the inverse operator, in this case a function that maps body-surface electrocardiogram signals to endocardial potentials, can be nonlinear and optimized using a set of historical data.

“We carefully add more parameters, which we counterbalance by adding a ‘Sobolev norm’ on the objective function we use to optimize the inverse operator,” Rajagopal said. “The newly added parameters allow presumed models of body tissue to be optimized by real data to provide more accurate reconstructions of endocardial potentials.”

This allows them to learn a model for predicting cardiac potentials from electrocardiograms that’s “realistic, accurate, and amenable to general purpose use as a new cardiac imaging tool,” said Rajagopal.

There are myriad applications for the group’s method. “Imagine a world where instead of a doctor listening to your heart through a stethoscope they can see a live video of your heart beating via ultrasound with corresponding electrical measurements of the local potentials on or around the cardiac tissue,” said Rajagopal. “The goal is for doctors to be able to treat patients with cardiac issues without needing to use invasive surgeries just to determine the cause.”

In some cases of atrial fibrillation, for instance, doctors might be able to localize the source and determine whether surgery is recommended for the patient. “A lot of work remains to be done before we can make this a reality,” he said. “But our work is a good step in that direction, since it shows that the resolution of the noninvasive reconstruction can be sufficiently high to aid in diagnosis and prognosis of such cardiac disorders.” 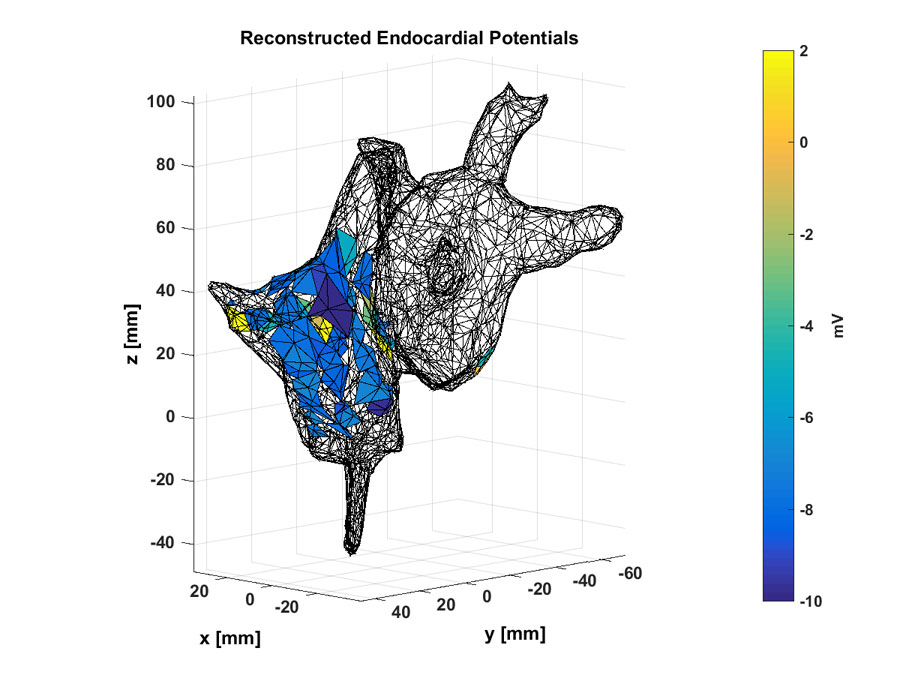