Researchers in Singapore have rendered electronic components thermally invisible, thanks to thermoelectric modules

The system, designed by by scientists at the Nanyang Technological University (NTU) in Singapore, has the potential to fine-tune temperature distribution and heat flow in electronic and semiconductor systems. It has application in devices with high requirements for efficient dissipation and homogenous thermal expansion, such as high-power engines, magnetic resonance imaging (MRI) instruments, and thermal sensors.

“Because of its shape flexibility, the active thermal cloak might also be applied in human garments for effective cooling and warming, which makes a lot of sense in tropical areas such as Singapore,” said Prof. Baile Zhang of NTU.

Zhang and colleagues had been experimenting with metamaterials, artificial composites that exhibit properties not found in naturally occurring substances. They had previously designed a metamaterial thermal cloak that passively guided conductive heat around a hidden object. That device lacked an on/off switch and could not be adapted to objects of varying geometries.

“We then started to consider the question of whether we can control thermal cloaking electrically, not by guiding heat around the hidden object passively with traditional metamaterials, but by ‘pumping’ heat from one side of the hidden object to the other side actively, with thermoelectric modules,” Zhang said. He and his colleagues describe the construction and thermal mechanics of their cloak this week in a story that appears on the cover of Applied Physics Letters, from AIP Publishing.

To construct their active thermal cloak, the researchers deployed 24 small thermoelectric modules, which are semiconductor heat pumps controlled by an external input voltage, around a 62-millimeter diameter air hole in a carbon steel plate just 5 mm thick. The modules operate via the Peltier effect, in which a current running through the junction between two conductors can remove or generate heat. When many modules are attached in series, they can redirect heat flow. The researchers attached the bottom and top ends of the modules to hot and cold surfaces at 60° C and 0° C respectively, to generate a diffusive heat flux.

When the researchers applied a variety of specific voltages to each of the 24 modules, the heat falling on the hot-surface side of the air hole was absorbed and delivered to a constant-temperature copper heat reservoir attached to the modules. The modules on the cold-surface side released the same amount of heat from the reservoir into the steel plate. This prevented heat from diffusing through the air hole, a technique, the researchers say, that can be used to shield sensitive electronic components from heat dissipation. 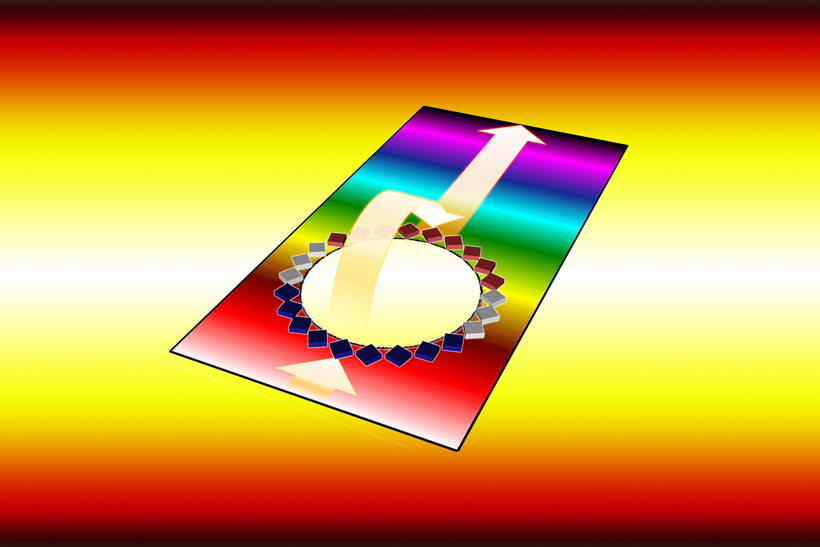 Additionally, the researchers found that their active thermal cloaking was not limited by the shape of the object being hidden. When applied to a rectangular air hole, the thermoelectric devices redistributed heat just as effectively as in the circular one.

Looking ahead, Zhang and his colleagues plan to apply the thermal cloaks in electronic systems, improving the efficiency of heat transfer, and develop an intelligent control system for the cloak.