WASHINGTON, D.C., July 25, 2017 — Placing a magnet on your refrigerator might hold up your calendar, but researchers from India’s Saha Institute of Nuclear Physics found that placing one outside a plasma chamber causes a localized, fireball-like structure. This work may help understand plasma dynamics under these north-south, or dipolar, magnetic fields. They present their results this week in the journal Physics of Plasmas, from AIP Publishing.

Traditionally, work in this field is conducted by keeping a permanent magnet inside a plasma chamber — this means there is no way to vary field strength or field line structure. By placing the bar magnet on the outside of the plasma chamber, the authors of this paper could change the position of the magnet and vary the strength of the magnetic field.

“Though bar magnets have been used in plasma experiments, the focus was mainly on the measurement of plasma equilibrium parameters like density, potential and other fluctuation measurements,” said lead author Pankaj Kumar Shaw. “In our opinion, this is the first effort to investigate nonlinear dynamical phenomena of the fluctuations under dipolar magnetic field.”

In these previous studies, the introduction of a magnetic field to plasma would cause the plasma fluctuation to go from order to chaos. Placing the bar magnet outside the plasma chamber, Shaw and his colleagues found that increasing the magnetic field strength revealed a transition from order to chaos via a process of a period doubling bifurcation.

“Following a particular sequence from order to chaos via [a] period-doubling route was unexpected,” said Shaw, who added that while previous experiments had reported the emergence of turbulence and chaos from introducing a magnetic field, that this was the first experiment to report a doubling route to chaos with magnetic field strength. 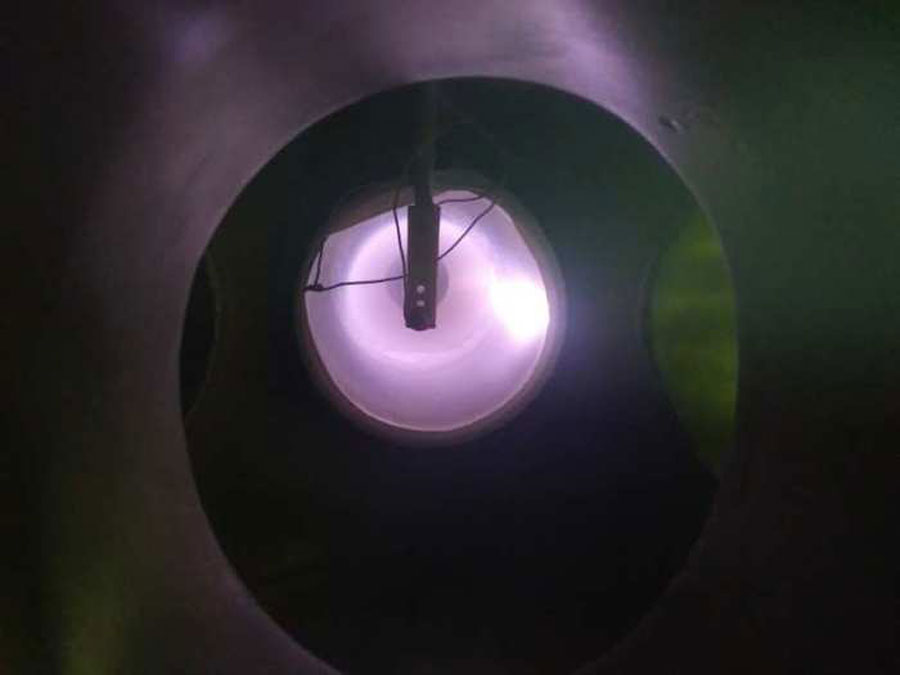 In the future, Shaw said his team hopes to design a new plasma experiment that incorporates more bar magnets and investigate their effects on plasma dynamics.

The results of this paper could be important in space plasma research, said Shaw. Specifically, it could help scientists understand effects such as magnetic anomalies on solar wind-lunar surface interactions. It could also prove vital in other areas of plasma applications such as plasma processing of materials where magnetic fields are extensively used.

Knowing the “root cause of plasma instabilities is important for applications of plasma-surface interactions,” Shaw said. Furthermore, he thinks this could help educate a future generation of physicists. “This simple experiment can be used to teach various aspects of plasma physics, nonlinear dynamics, and time series analysis to high school students.”